“All great stuff and all on the verge of happening. What Hawking has to do with it is anyone’s guess.” Read on for the verdict on last night’s TV. 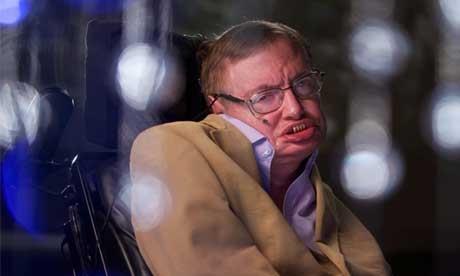 “All great stuff and all on the verge of happening. What Hawking has to do with it is anyone’s guess.”
Matt Baylis, Daily Express

“Its score was that of a movie, all strings, booms and dramatic emphasis – now there’s something to wind up science-doc purists. It even made me cry filmic tears; ones that slowly gather in the corner of your eyes and synchronise themselves with the swell of the music. Having a silent cry as a paralysed woman stood up and walked; what could be more filmic than that?”
Alex Hardy, The Times

“It’s seductive, sexy science – gizmos and gadgets that are immediately and obviously impressive. Presented by a new breed of TV science people who don’t have wild hair or white coats. That’s fine by me.”
Sam Wollaston, The Guardian

“Had [Hawking] really been writing the script you’d have thought he might have had some direct comment about the wheelchair that could be controlled by thought alone. He’s the mascot on the hood, I suspect, but the vehicle he’s attached to bowls along at a decent rate. And if you want something more pensive about unintended consequences, then you’ll just have to go elsewhere.”
Tom Sutcliffe, The Independent

ORIGINS OF US, BBC2

“If the experience of watching this programme could be compared to anything then it would be like listening to someone telling you in a very long-winded and roundabout fashion that you haven’t got a job when you guessed that already from the disastrous interview you had a week ago.”
Matt Baylis, Daily Express

“If this was a movie it would have been a romance; loaded with sunsets over the African savannah and Roberts’ flushed smile. But alas, this softness did not benefit from being so warm on the of Brave New World’s brave new world.”
Alex Hardy, The Times

“She speaks in that way Cox does, full of ecstatic wonder and amazement, as if everything she’s saying is extraordinary.”
Sam Wollaston, The Guardian

“[Roberts] shows us the evidence – in the form of fossil remains – and then shows us how that evidence can be effectively interpreted, so that you learn not just the final conclusion but the often ingenious ways in which it was reached.”
Tom Sutcliffe, The Independent