“Gimmick-free, grown-up television about different ways of life.” Read on for the verdict on last night’s TV. 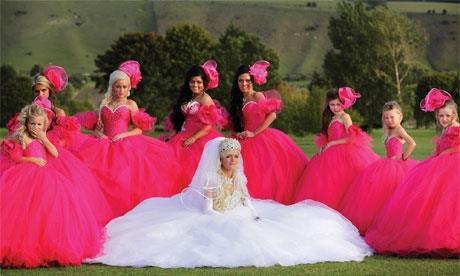 “On one level this was a sensitive look at a complex and in some ways contradictory society; on another level it was just about really big dresses.”
Tim Dowling, The Guardian

“There is a freak-show element to the series that no amount of covering talk about proud communities and ancient traditions will cover up. On the other hand, I don’t think any of the people on screen would give a damn what the audience think of them anyway.”
Tom Sutcliffe, The Independent

“What this show needs is a hot-headed rebel who wants to get married in an elegant cream cocktail dress when she is 37.”
Andrew Billen, The Times

“This series harks back to the golden age of Survival and Disappearing World – gimmick-free, grown-up television about different ways of life.”
Matt Baylis, The Express

Natural World Special: Miracle in the Marshes of Iraq, BBC2

“This was a deeply satisfying film, largely about nature making its own recovery.”
Tim Dowling, The Guardian

“It had little choice but to incorporate the behind-the-scenes footage into the film itself, a report on attempts to repair Saddam Hussein’s deliberate destruction of the marshlands of southern Iraq.”
Tom Sutcliffe, The Independent

“Foote and Johnson’s odd but engaging film, which, had an IED been placed in the wrong place, could have cost them their lives, sounded a long awaited chirp of optimism.”
Andrew Billen, The Times

“It provided a fascinating look at the science behind the 1993 blockbuster.”
Matt Baylis, The Express