“This is by far the most entertaining Bear Grylls show I’ve ever seen.” Read on for the verdict on last night’s TV. 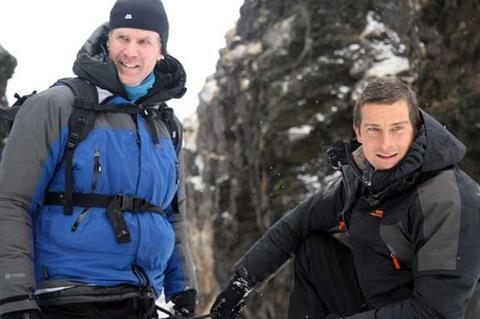 “Words like ‘chalk’ and ‘cheese’ might well have floated about when this show was being planned… Regardless of what you think of Grylls, this idea would have worked well if he’d been given the right foil.”
Matt Baylis, Daily Express

“This is by far the most entertaining Bear Grylls show I’ve ever seen. Bear himself actually becomes more likeable. He even has a stab at humour himself.”
Sam Wollaston, The Guardian

“Bear Grylls’s most pressing endurance problem these days is how to survive in the cruel, pitiless terrain of the commissioning editor’s in-tray. There’s only so many times, after all, that you can eat a dead camel’s putrid brains… before the spectacle begins to lose its savour… Don’t underestimate Bear though, who usually knows where to go for a bit of revitalising nourishment.”
Tom Sutcliffe, The Independent

Last Chance to See, BBC2
“Unless you are crazy for scripts that refuse to split infinitives, you would have to admit that Fry’s commentary, as added in post-production, has been mediocre… Carwardine still looked in permanent fear of boring Fry.”
Andrew Billen, The Times

Emma, BBC1
“Emma has become a turgid mess, its lead performance by Romola Garai a girlish travesty, its pace funereal and its narrative far from clear. But the worst thing is the script.”
Andrew Billen, The Times

Charley Boorman: Sydney to Tokyo by Any Means, BBC2
“Is Charley Boorman congenitally incapable of saying anything remotely interesting.”
Sam Wollaston, The Guardian

The South Bank Show: Lee Hall, ITV1
“Looked as if it had been held over from a previous series… It was interesting though.”
Tom Sutcliffe, The Independent