“It was a revealing account of a community robbed of purpose.” Read on for the verdict on last night’s TV. 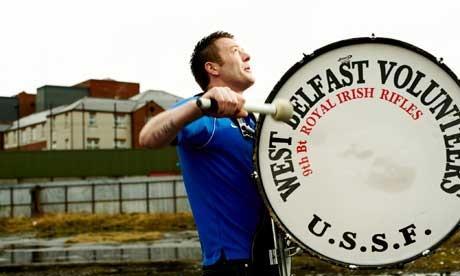 “Even after the Troubles, Belfast’s Shankill Road is a tough place. For men in this hard-up, staunchly loyalist area, there are few chances to lark about or to be creative but as this brilliant piece of social film-making proved, we’d be wrong to think that the men have any less soul.”
Matt Baylis, The Express

“It was a revealing account of a community robbed of purpose, where suicide is doing the job once so efficiently accomplished by paramilitaries.”
Andrew Billen, The Times

“You only have to see a marching band on screen to know that it has almost certainly been put there as an emblem of obdurate sectarian pig-headedness. Which meant that Alison Millar, director of it, had a task on her hands in trying to broaden our understanding of the relatively small group of people who react to the sight with a sense of pride.”
Tom Sutcliffe, The Independent

“It featured two silver-tip sharks flying from Australia to Dubai and was notable, among other things, for the line: “If we’re not there on the dot, they’re not going to let these sharks on the plane.”
Matt Baylis, The Express

“He doesn’t give a damn about you”, Lord Sugar told Vincent, who had been accused of blindingly extreme toadying. “I have seen that type before.” So have we. The show’s getting samey.”
Andrew Billen, The Times

“The big question now is whether Lord Sugar can overcome his embedded class prejudices and give Tom a chance to put his regrettable middle-class roots behind him.”
Tom Sutcliffe, The Independent

Storyville – Fight to Save the World: Sergio, BBC4

“An intimate portrait of the life and death of the Brazilian UN diplomat Sergio Vieira de Mello. Though mainly his death. The main purpose of this film wasn’t just to remind everyone of his achievements in resettling refugees in Cambodia and mediating East Timor’s peaceful independence from Indonesia, it was to point a few guilty fingers at those responsible for him dying under a pile of rubble after a truck bomb destroyed the UN headquarters, where Sergio was head of mission, at the Canal Hotel in Baghdad in August 2003.”
John Crace, The Guardian

“More than half the department’s weekend admissions are alcohol-related, and during the course of the film a succession of drunks turned up bleeding and confused in casualty demanding the right both to be patched up and to abuse anyone who tried to help them.”
John Crace, The Guardian

Diagnosis Live from the Clinic, Channel 4

“The fact it is live makes the show even stranger. What kind of person Skypes a TV doctor for a diagnosis? I’d guess only someone who is a bit pissed or was doing it for a bet.”
John Crace, The Guardian