“It is sophisticated television, but easy to engage with.” Read on for the verdict on last night’s TV. 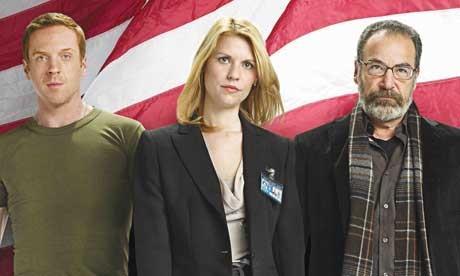 “Its twists and revelations are expertly applied and its commitment to shades of grey – moral and emotional as well as narrative – is promising.”
Tom Sutcliffe, The Independent

“A proper knuckle-gnawing thriller that grabs you by the goolies (or lady-goolies) and drags you along for the ride whether you like it or not. In the same way that 24 did in many ways.”
Sam Wollaston, The Guardian

“A splendid spin on the detective format, a sleuth you barely trust with doubts thrown in not by clumsy dialogue and glaring close-ups but the subtlest tricks of the film-maker’s armoury.”
Matt Baylis, The Express

“Claire Danes is a wonderful foil to Damian Lewis’s slow solid Brody. As she debriefs him, the air conditioning hums with tension. It is sophisticated television, but easy to engage with.”
Andrew Billen, The Times

“It is beautifully made, elegantly scripted, well-performed, meticulous in period detail and captures a time (we’ve now reached 1938 and the run-in to the second world war, so not a bad time to be capturing). It’s just a bit, well, dowdy in comparison [to Downton Abbey] (and because of the subject matter – class soap opera played out in a big posh house with history plus social change going on in background – comparison is inevitable).”
Sam Wollaston, The Guardian

“The kick-off of the new series wouldn’t have passed muster in comparison to anything. Not even Cash in The Attic.”
Matt Baylis, The Express

“Thomas has made her upstairs characters far too proximate to history. Downstairs, the humour is as insultingly obvious as the geopolitics.”
Andrew Billen, The Times

“When a character desperately shouts, “Will someone please tell me what’s happening”, towards the end, quite a few viewers will echo the sentiment. Still, it gleams with quality like a thoroughbred, from a cast that includes Dustin Hoffman and Nick Nolte, to Mann’s loving detailing depiction of the stables and racetrack.”
Tom Sutcliffe, The Independent

“I need another episode to fully understand what’s going on. Next week then. It looks fabulous though, sort of Boardwalk Empire with horses.”
Sam Wollaston, The Guardian

“Its Saturday debut ideally required knowledge of horse racing, odds, jargon and organised crime. As a good second, all it needed was patience.”
Andrew Billen, The Times