“The constestants have been hand-picked to provide the finest possible combination of looks, talent, arrogance and insanity.” Read on for the verdict on the weekend’s TV. 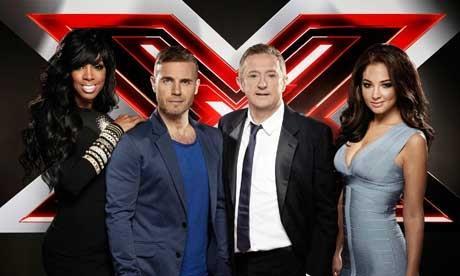 “From now until Christmas we will be held spellbound by the antics, desperation and blinding stupidity of some talentless wannabe pop. But that ‘s enough about the panel. The constestants have been hand-picked to provide the finest possible combination of looks, talent, arrogance and insanity.”
Matt Baylis, The Express

“As predictable as the show’s stories now are, they are still good, funny, easy… and increasingly appealing as the nights grow longer and rainier over the cowfield.”
Alex Hardy, The Times

“Janet does Your Song, by Elton John, in her strange pixie voice – a voice that could be amazing, or a bit annoying, I’m not quite sure which. The judges certainly like it. They’re spellbound, practically crying. What are the tears about? That Janet is a bit shy, or cute, or that she comes from Northern Ireland – not even a town but the middle of nowhere? Or is it really her performance? I don’t know, but I’m welling up too now. Oh my God, I’ve been got, by The X Factor. Damn.”
Sam Wollaston, The Guardian

“It is a new pointless talent show hosted by Alexander Armstrong, the talents being pointless rather than the show, which is actually quite entertaining in a silly way.”
Tom Sutcliffe, The Independent

“There are no tears, not many laughs really. It’s mainly groans. Epic Win has got disappointing viewing figures and just one series written all over it. That’s a no from me then.”
Sam Wollaston, The Guardian

“Ocean Giants was at pains to persuade us that cetaceans are not only the smartest animals on the planet, but also possibly the most empathetic. About the first claim I would say only this; that their brain power seems to be somewhat narrowly focused in the field of fish-catching (though they are absolute Einsteins of mackerel-snaffling). About the second, I’ll reserve judgement.”
Tom Sutcliffe, The Independent

The Man Who Crossed Hitler, BBC2

“Hayhurst’s smart, snappy script attempted to apply the fantasy fluency of an American courtroom procedural to the all too real violence of brownshirt thugs. It was a kind of SA Law, if you like.”
Tom Sutcliffe, The Independent

“Anyone who has sat through a trial knows it boils down to people delivering speeches. They’re often very good speeches but utterly lacking in the sort of action and tension you need to make TV work.”
Matt Baylis, The Express