“I knew this striking atheist would get her own series.” Read on for the verdict on last night’s TV. 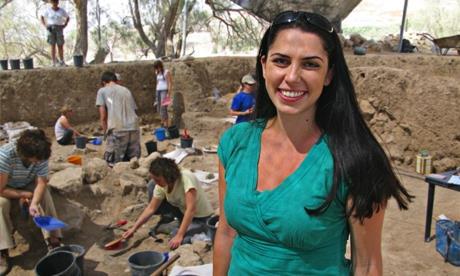 “It is distinctively interesting, essential watching for anyone interested in the finer points of ancient Hebrew theology and pretty intriguing even for those of us who aren’t.”
Tom Sutcliffe, The Independent

“Having seen the Bible scholar Francesca Stavrakopoulou’s cameos in past documentaries, I knew this striking atheist would get her own series. Bible’s Buried Secrets proves that she deserves it.”
Andrew Billen, The Times

“Dr Francesca Stavrakopoulou, says it [the Bible] is a carefully edited, man-made work of fiction.”
Matt Baylis, The Express

“One imagines she has quite a few such bad moments – and times when the resilience and courage falter – but overwhelmingly here she was putting on a brave face, a cliché that has a sharp edge to it in the case of those with conspicuous disfigurements.”
Tom Sutcliffe, The Independent

“The narrative of Piper’s multiple plastic surgeries and her mental recovery from the attack has largely been told. Instead, last night our attention, and hers, turned to others.”
Andrew Billen, The Times

“Thankfully the makers spurned the easy way out and it rapidly became something, if still not comparable to the original documentary, a great deal better than it had threatened to be.”
Lucy Mangan, The Guardian

“This, pardon me, vehicle for Will Mellor not only boasted the punchline “I hope you get dick cancer and die” but challengingly, almost, sort of, made fun of someone with Down’s Syndrome. Vandalism.”
Andrew Billen, The Times

“Mixed in with the usual arse/elbow experiments (blind tastings proving that children can like the taste of fruit and veg if they don’t know what they’re getting!) were … well, I’d use the word insight, but this would raise expectations for follow-up action of which there seemed to be none.”
Lucy Mangan, The Guardian

“Quentin told us she had a big birthday coming up this year and she fancied doing something really special to mark it. As far as reasons to be making a TV series about India go, that’s pretty flimsy but at least more honest than the reasons most celebrities provide for their televised holidays.”
Matt Baylis, The Express