“Just the right mix of vileness and vulnerability”. Read on for the verdict on last night’s TV. 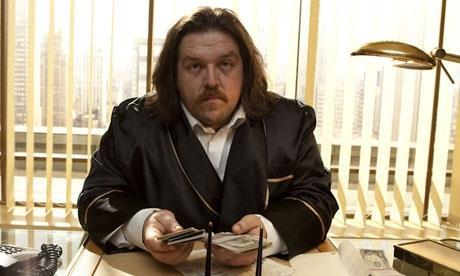 “Frost does him with just the right mix of vileness and vulnerability. He grew on me to the extent that he’s half way to eclipsing my own John Self. A great performance…Of all the BBC’s 80s season, this is the mostambitious programme, and the best, so far.”
Sam Wollaston, The Guardian

“A flaccid anti-climax. You’re going to need one hell of a voiceover…or a dramatisation that snaps from scene to scene. Here, they hadn’t done either. There is a big problem of casting, too… If you have read the book you’ll be better off just reading it again.”
Tom Sutcliffe, The Independent

“A visually slick representation of 1980s obscenity…But you really couldn’t blame the novel’s celebrants…for smarting at every dilution of Amis’s verbal animation.”
Alex Hardy, The Times

“Frost’s charms as an actor and that old British soft spot for a loser make us more than keen to keep watching. It’s just a shame our enthusiasm hasn’t so far been rewarded with much in the way of a story.”
Matt Baylis, Daily Express

THE STONES IN EXILE: AN IMAGINE SPECIAL, BBC1

“A beautifully atmospheric [documentary] that perfectly captures its time.”
Sam Wollaston, The Guardian

OVER THE RAINBOW, BBC1

“Very much had the air of a programme that needed putting out of its misery.”
Alex Hardy, The Times

“It steered away from asking the obvious question: why is this appalling crime so widespread in South Africa? More [people] were surely offended when this programme failed to ask them.”
Matt Baylis, Daily Express