“It carried many of the scene-of-primetime hallmarks familiar to us grizzled veterans.” Read on for the verdict on last night’s TV. 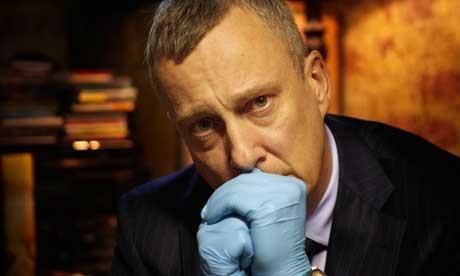 “This two-parter carried many of the scene-of-primetime hallmarks familiar to us grizzled veterans… It is stylishly shot, and has more than enough plot idiosyncrasies to distinguish it from stuff we’ve seen a thousand times before.”
Brian Viner, The Independent

“Somehow the adaptation managed to turn a decent book into a succession of crime series cliches…Nor did it help that Tompkinson seemed badly miscast. You might have overlooked all this if there had been just a minute of suspense. Every plot development was telegraphed well in advance.”
John Crace, The Guardian

HORIZON: BACK FROM THE DEAD, BBC2

“It was almost as if [Kevin] Fong was so amazed by what he was seeing that his own critical faculties went into suspended animation.”
John Crace, The Guardian

“He could have brushed up on his people skills before he went on the telly…At any rate Kevin’s clinical enthusiasm almost but not entirely got in the way of a most interesting topic.”
Matt Baylis, Daily Express

“This was textbook popular science, the perfect mix of ingredients and presentation.”
Sarah Vine, The Times