“Cutting open a camel is a messy business and unless you’re a vet and know what you’re looking at.” Read on for the verdict on last night’s TV. 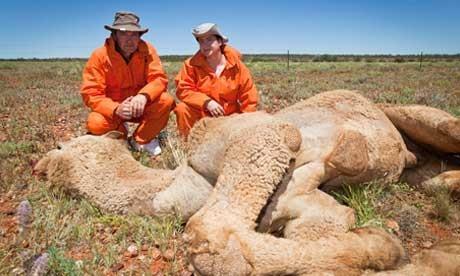 “Cutting open a camel is a messy business and unless you’re a vet  and know what you’re looking at, one mass of organs, blood and tissue is much the same as any other; it was the computer animations that more often made the point. I got the feeling the producer didn’t have too much faith in the carnage scenes either, as a second presenter was sent to pad out the programme with a load of pointless camel stunts.”
John Crace, The Guardian

“The pitch for this post-mortem approach to the natural history film is simple. Find a big dead animal and take it apart to see what makes it tick… the programmes also invariably include a moment when everyone has to get up to their armpits in intestines, and haul everything into the open. By the end of the dissection – conducted under a blazing outback sun… what you had seen had been fascinating.”
Tom Sutcliffe, The Independent

“In this third series of Inside Nature’s Giants, giant squid, polar bears and sperm whales have already been dealt with, so to speak, and the results have been fascinating. Last night it was camels. The dissection, as always, was the most compelling part. Nature rarely comes this raw or immediate.”
Ben Machell, The Times

“In these times of instant information overload I can’t be the only one to suffer from delusions of wisdom. We all like to think we’ve got just as much nous as the panel members as we sit there laughing at people pitching limping business ideas… What is undeniably a great idea is a show that still keeps on surprising us  after so much time.”
Matt Baylis, The Express

“For many of us watching of course, 9/11 was like a film, a breathtaking spectacle unfolding on our screens. For that reason hearing the numbness and the anger of these young people ten years on was a sharp lesson. It hasn’t been a major news event for them but something that reached into their lives and twisted them out of shape for ever.”
Matt Baylis, The Express

“Before 1995, it was reckoned to be in everyone’s best interest if sperm and egg donors remained, as it would be unsettling and confusing if their identities were revealed. This sounded fine in theory but failed to take into account most people’s hard-wired curiosity about their identity. In 1992, Sylvia Barr donated her eggs to a fertility clinic, never expecting to find out what became of any subsequent children. It was touching and humbling to witness their first meeting, as they compared gaps between the front teeth and bends in the toes. “My soul is satisfied,” said Sylvia. Mine too.”
John Crace, The Guardian

“I know what’s supposed to be on offer here – a tantalizing glimpse of the happy bacchanal that lies just on the other side of the door marked Conscience. But even so it can grate. There’s a difference between a fiction about people who never think about consequences and a fiction that pretends those consequence don’t exist, and I wonder whether Shameless hasn’t crossed over to the lesser of the two.”
Tom Sutcliffe, The Independent

“The problem many have with Shameless - and last night was a case in point – is that too often you are left wondering if the funny bit could have been a bit funnier, the dramatic more dramatic, the weird bits weirder. If this is born of over-ambition, it feels a bit niggardly to complain, but there you go. Still, it’s the most ambitious program about inertia ever.”
Ben Machell, The Times