A mixture of reportage and reality television, Ambulance follows a dedicated team of paramedics through the war-torn streets of Gaza at the height of its 2014 summer conflict with Israel. 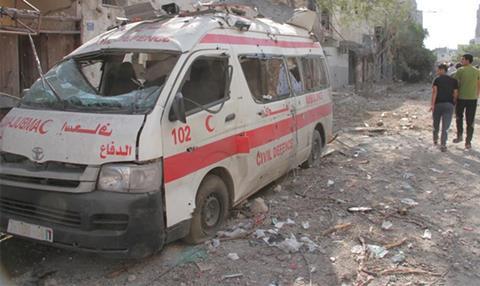 A mixture of reportage and reality television, Ambulance follows a dedicated team of paramedics through the war-torn streets of Gaza at the height of its 2014 summer conflict with Israel. The front-line, eyewitness footage of 23-year-old Mohamed Jabaly, who joined the ambulance crew on the first day of the way, is filled with images of chaos, hysteria and human tragedy that are already familiar from television coverage at the time. What distinguishes Ambulance, however, is the way that Jabaly’s footage builds into something less fleeting, as it creates a wider, more thoughtful portrait of a city under siege and becomes a fascinating testimonial to personal and collective resilience. As such, the film should be guaranteed further festival exposure following its world premiere at Sheffield Doc/Fest, with strong possibilities for TV and cable sales.

Jabaly, who admits that “clinging to the camera made me feel safe” during all the destruction and suffering, is heard but never seen but his camera is always in the thick of the action, bobbing through the crowd as the paramedics arrive at another bombed out building or rush into a hospital carrying wounded survivors. Some of the crew embrace his presence, others seem more reluctant to respond to his questions.

As Jablay films every day and night over the 51 days of the war, there is the inevitable possibility that the documentary could grow repetitive but, for every adrenaline-fuelled mercy dash, scenes of bedside histrionics or image of blood and bone being cleaned from the ambulance interior, there are more reflective, even humorous, moments. Surveying the rubble of his former home, one man laments, “The washing machine is new - I haven’t even paid for it.”

Editor Nanna Frank Moller does a terrific job of shaping all the footage into a compelling, compact narrative, in which Jabaly’s doubts and fears remain paramount. Indeed, Ambulance is also a representation of his personal journey through the 2014 war, from the friendship forged with driver Abu Marzouq to the terror when the crew are at the very heart of a massive explosion in the dark of night.

Jabaly and Moller also broaden the scope of the film, to show such things as the masses collected at an Egyptian border crossing that is unlikely to open any time soon to the simple, carefree joy of children celebrating the Eid holiday and the fragile hope of the ceasefire. In its quieter moments, amidst ruined buildings and stoical survivors who take comfort in just being alive, Ambulance carries an echo of Humphrey Jenning’s portraits of wartime London. It is not a film that feels the need to point the finger of blame or delve deeper into the politics of the Israeli-Palestinian tensions but, by merely documenting the everyday realities of war, the endless human casualties and the remorseless climate of fear and loathing, it effectively underlines the tragic intractability of the conflict.