Behind the scenes: Deutschland 83

With a Cold War backdrop and an ’80s pop soundtrack, US-German co-pro Deutschland 83 is hotly tipped for international success. Andy Stout finds out how the sounds and look of the period were recreated 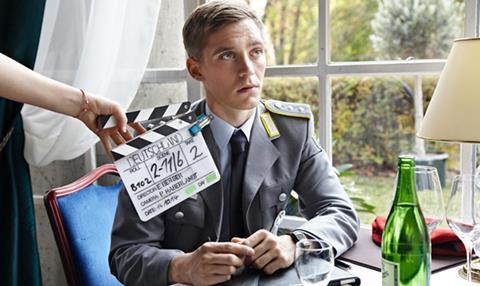 Slated to be the first German-language series ever to screen in the US when it appears on Sundance TV later this month (17 June), Deutschland 83 bucks the German trend for long-running police procedurals and TV movie events.

Created by the German-American husband-and-wife team of Anna and Jörg Winger, the eight-part miniseries was previewed in bravura style at this year’s Berlinale festival, where the first two episodes played to packed houses.

The US-German co-pro is set in pre-unification East and West Germany in 1983 and explores of the tensions between the two countries: cruise missiles had just arrived on European soil, Ronald Reagan had infamously referred to the Soviet Union as “the evil empire”, and the constant threat of nuclear war was enshrined in popular culture, with songs such as Nena’s 99 Red Balloons containing a strong anti-war message.

Against this backdrop, the Wingers have set an engaging spy thriller involving a zealous young East German border guard with a desire to change the world, who is sent undercover by the Stasi to infiltrate the West German army and report on Nato military secrets.

99 Red Balloons is a recurring motif throughout Deutschland 83, which has a certain knowing way of dealing with the tropes of that period that echoes the successful approach of other nostalgia-mining productions such as Mad Men. As such, careful attention was paid to getting the audio and the soundtrack just right.

“The main challenge was to recreate the sounds from the days of the GDR and FRG,” says sound mixer Holger Lehmann. “We couldn’t use electronic sounds to match equipment from the 1980s, so we needed to find analogue sounds for machines like the typewriters working in the background of offices.”

The audio came from a combination of library material and a very active Foley department, making much use of old tape decks, typewriters, microphones and the like.

“We had a lot of old machines but we still found ourselves having to put together multiple sounds to make one that was right,” says Lehmann. “We used six sounds just to illustrate one tape machine.”

Equally careful attention was paid to the look, of course. “We wanted a colourful film,” explains DoP Philipp Haberlandt. “The foundation for that look was based in set design and costume. In addition, I used gels for the lights, with the intention of distinguishing the different places where the story is set. I also modified the colour temperature of the Alexa in the ‘current’ scenes.”

Deutschland 83 was shot using two Arri Alexas to compensate for a truncated timetable. “It was a tight schedule and we wanted to create as many angles as we could in a short space of time,” says Haberlandt.

“The camera work is very much split in two ways: we have a very emotional part of the film where we have gone handheld and follow the main character; the other part is a more conventional spy thriller, and for that we used the two cameras.”

Despite its weight, especially when fully loaded, Haberlandt used the Alexa for the handheld shots as well, pairing it with an Easyrig rig.

“I used the Amira on a commercial last month and it’s noticeably lighter,” he says. “Generally, we went for short focal length, from 18mm to 32mm, to be physically close to the characters and to create a sense for the room. This applies to both handheld and static camera. The handheld parts are more lively, following the characters. For the static parts of the series, we tried to achieve a symmetrical strictness.”

The production was shot on HD Pro Res 444 and graded on Nucoda. The Alexas, meanwhile, were paired with Cooke S4 primes. “I used the Cookes to avoid it looking too digital,” says Haberlandt.

He says the Alexa is the first digital camera he’s worked with that truly emulates film-style operation. “If you shoot Alexa with master primes, it can be too sharp. The softness is great when you come from focus to defocus. I like the range and it’s a little more haptic. The colours are good – and this is a very colourful production.”

One of the production’s major complications was the fact that, while the majority of the crew were consistent across the eight episodes, due to previous commitments, a new director and DoP had to be brought in for the final three episodes. It was here that the tight shooting schedule became an advantage.

“We shot mostly on location with a very tight shooting schedule, which meant I worked very tightly with the gaffer, who did the settings for the next location or the next scene, making sure everything was optimised to fit into the schedule,” says Haberlandt.

“So while it was a challenge to have the same look and the same style across the two different teams, as each team was looking at each other’s rushes and most of the crew were the same, we all knew how each of us was working.”

Whatever the difficulties, the result is a show that, with a US screening, a bidding war concluded in France and three broadcasters reportedly trying to snag UK rights, could put German drama firmly on the international television map.