As part of the BBC’s major season of programming to mark the 100th anniversary of the start of World War I, BBC Productions’ daytime team in Bristol developed a lively but respectful magazine show that paid tribute to the servicemen and civilians that have contributed to British war efforts over the years. 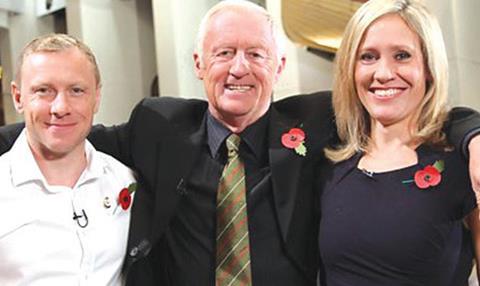 BBC Productions Wales for BBC One

As part of the BBC’s major season of programming to mark the 100th anniversary of the start of World War I, BBC Productions’ daytime team in Bristol developed a lively but respectful magazine show that paid tribute to the servicemen and civilians that have contributed to British war efforts over the years.

The 5 x 45-minute series, stripped across the week leading up to Remembrance Sunday 2014, was presented by Sophie Raworth from the newly refurbished Imperial War Museum in London, alongside former army officer Andy Torbet.

Through a series of powerful and moving personal stories, with reflections from celebrities including Kate Adie and Chris Tarrant (above), it brought the past into view through museum exhibits, and engaged viewers on every level with artistic performances on a remembrance theme.

The judges felt the show did an exceptional job of handling familiar territory. The programme informed an average of 1.1 million (17%) across its run on BBC1 and received an AI score of 88.

One panel member described the show as “an engaging, thought-provoking and genuinely moving piece of TV”, while another said it was a “thoughtful and illuminating show that both uplifted and informed”.

BBC daytime brought the Blitz to life with this insightful series taking celebrities back to their home towns to uncover personal stories of wartime Britain. Developed from a One Show item featuring Alan Sugar, stars including Ricky Tomlinson provided a daytime audience with a familiar way into Blitz stories from across the UK.

The raw emotion, conflict and humour revealed by the disputes put through Judge Robert Rinder’s court attracted peak daytime viewing figures of 1.3 million for ITV. The show increased ITV’s audience share in the slot and its second series was extended by 20 episodes while the first was still on air.

The Chase
Potato for ITV

As ITV’s highest-rated daytime show, The Chase went from strength to strength in its ninth series, with a run extended from 150 episodes to 190. It now has versions in nine territories including the US, where it is in its fifth series, plus China, Norway, Russia and Turkey. An Australian version began production last year.

Through The Keyhole meets Come Dine With Me in this tongue-in-cheek format, in which celebrities cook for a team of guests trying to win £500 by guessing whose house they are in. The funny cast of contestants provide plenty of laughs as their guesses fall wide of the mark – they suggest Bruce Forsyth when the answer is Louie Spence and Barack Obama when it is Ann Widdecombe.