In drawing on the energy and humanity of one individual, writer Peter Bowker and director Julian Farino concocted a one-of-a-kind drama to lift the spirits of even the most cynical viewer. 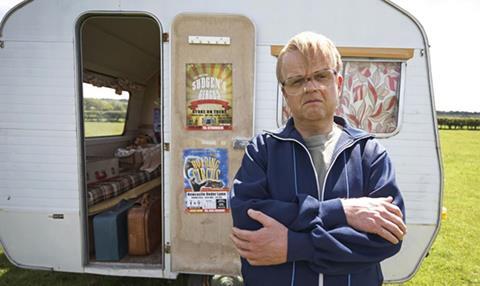 In drawing on the energy and humanity of one individual, writer Peter Bowker and director Julian Farino concocted a one-of-a-kind drama to lift the spirits of even the most cynical viewer.

The life story of Neil Baldwin – circus clown, lay preacher, university welfare officer and kit man for Stoke City – is a dramatist’s dream. But Marvellous’ genius lay in its refusal to go down the conventional biopic route, choosing instead to blur the boundaries between fiction and reality. Guided by Baldwin’s eccentric life path, his determination to take on the world on his own terms and his refusal to be boxed in by his learning difficulties, this was an unconventional film.

The real Baldwin popped up throughout to converse with Toby Jones’ fictionalised portrait, while members of Stoke City popped up in cameos and a choir of people with physical and learning difficulties provided a touching chorus to underpin the narrative.

Yet this was no sugar-coating: tough questions were asked about Baldwin’s life and the attitudes of people around him, with the film providing a forum for thought-provoking debate. Baldwin’s stock as a hero in his home town has only risen with each month since the film’s transmission, but perhaps its greatest achievement is that the NHS and Mencap now use it in training about learning disabilities. As the New Statesman put it: “This film should be prescribed as a wonder drug.”

An Inspector Calls
Drama Republic for BBC One

David Thewlis led an all-star cast in this triumphant revival of JB Priestley’s celebrated play, filmed on location in Scampton Hall in the playwright’s beloved Yorkshire. Without shedding the intensity of the play, screenwriter Helen Edmundson and director Aisling Walsh opened up the narratives, with some evocative flashbacks that added new layers to the gripping story.

After two series of dystopian dramas, Charlie Brooker took a portmanteau approach for this chilly Christmas special, with Jon Hamm, Oona Chaplin and Rafe Spall up for the ride. The production team rose to the challenge of creating four different worlds and a variety of innovative effects on a comedy budget. Small wonder Netflix has snapped up the format for a 12-part run.

In-demand Game Of Thrones star Maisie Williams took the lead in this timely thriller. Confined to one set, the drama played out through dialogue, text-speak and social media messages, all run past a ruthlessly demanding set of teens to ensure authenticity. The claustrophobic and thought-provoking drama resonated with 2.1 million viewers

Danny And The Human Zoo
Red Production Company for BBC One

A star-making turn from Broadcast Hot Shot Kascion Franklin powered Lenny Henry’s autobiographical tale, which drew on his upbringing in Dudley and big break on TV’s New Faces. By turns poignant, life-affirming and funny, this was a vivid recreation of Britain’s recent past and its thorny relationship with racial politics.

Cementing Jason Watkins’ reputation as one of the finest screen actors of his generation, Peter Morgan’s two-part depiction of one man’s trial by tabloid was the result of meticulous research, including hours spent with Jefferies himself, filming close to his Bristol home, and reproducing Leveson inquiry scripts verbatim