The BBC’s move into e-sports for its coverage of the four-day League of Legends World Championship, an online video-gaming tournament at Wembley, proved a major success for the broadcaster. 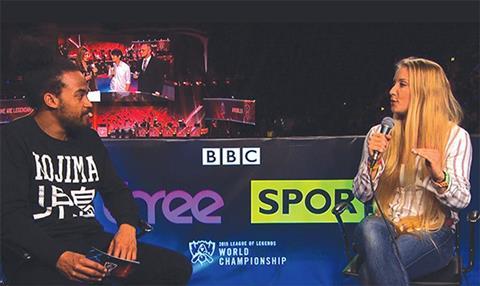 Covering e-sports live was a first for the BBC, which hoped to appeal to the 27 million people who play the game every day, with more than 70 million hours of last year’s championships watched by fans across the globe.

In addition to covering the tournament itself, the producers examined the basics of the game, the lives of top professional gamers, the absence of female pro gamers and the importance of YouTube in the community.

The coverage was enhanced by live text commentary alongside the video streaming, curated by gaming experts, with established BBC talent such as Radio 1 Xtra’s Dev Griffin and Julia Hardy joined by gaming stars such as Leigh ‘Deman’ Smith and James ‘Stress’ O’Leary.

The judges said the “brave” commission “ticked every box” and was a “perfect match of content, target audience and broadcaster, which was delivered with a spot-on tone”.

The Isle of Man TT is the toughest sporting assignment of the year for North One, with 27 fast-turnaround UK and international programmes created in 10 days. Judges called it an “extraordinary technical achievement that also delivered epic storytelling”.

The music festival is one of the BBC’s most popular live events across linear TV, online and radio. The BBC Glastonbury website racked up 4 million unique users across the week, with 1.9 million requests to watch performances live and more than 8.6 million global views of clips on YouTube and Facebook.

The rowing event had not been televised for 50 years, but in 2015, five days of racing was broadcast live in high definition on You- Tube, with the final day available on the BBC Red Button. The live stream clocked up almost 300,000 playbacks, with an average viewing time of more than 20 minutes.

The sports production giant mixed first-class sports coverage with a light-entertainment feel, including smoke machines, lighting and innovative graphics and camera work, to bring the 4,000-year-old Bangladeshi contact sport to a new audience.

THE VOTE
Twofour and Donmar Warehouse for More 4

The election night drama broadcast live from the Donmar Warehouse, set in a fictional polling station in the final 90 minutes before the polls close, drew More 4’s largest overnight audience of the year with 673,000 viewers, and was the digital channel’s most downloaded programme of the year.