The FA is bringing the live series back after its popularity during the 2018 World Cup. 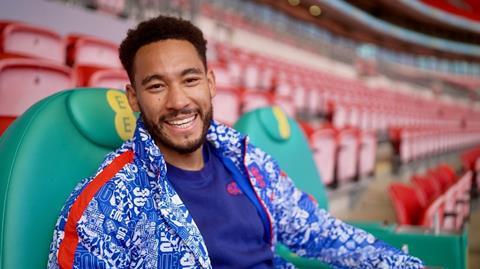 The FA is bringing back its Lions’ Den show for Euro 2020, with the support of EE.

Popular during the 2018 World Cup, with 6 million views and 45% of viewers under 25, the show will be streamed live from the England team’s St. George’s Park basecamp throughout the tournament on the Three Lions’ official Twitch channel.

It will be hosted by Josh Denzel, and give England fans the chance to interact directly with players every afternoon from 8 June, using Twitch’s integrated chat tools. In addition, reporter Rachel Stringer will meet with supporters throughout the country on England matchdays - using EE’s 4G and 5G networks to broadcast.

Members of MyEnglandFootball will also have the chance to join a virtual audience by taking a place on the EE Fan Wall, with two spots also available for EE customers.

Kathryn Swarbrick, commercial and marketing director at The FA, said: “Lions’ Den is back by popular demand and we’re thrilled to once again bring fans in to the heart of the England camp during a major tournament. Lions’ Den connected by EE will provide unique access to the squad and allow fans to engage and interact directly with players like no other show during this summer.”

Pete Jeavons, director of marketing communications at BT & EE, comments: “We’re excited to be bringing Lions’ Den connected by EE back to football fans this summer. With the best seats in the house – whether that’s in your living room, on the bus or in a park – you can enjoy exclusive content, competitions and even the chance to talk with the players.”