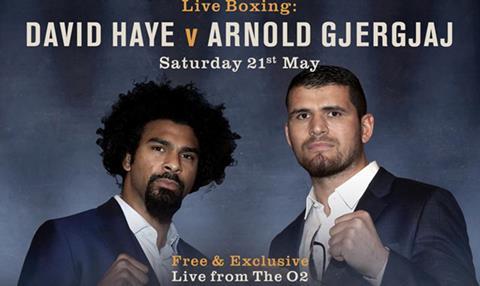 The male skewing-channel will air Haye’s fight with Kosovon boxer Arnold ‘The Cobra’ Gjergjaj on Saturday 21 May.

It follows Haye’s comeback fight in January, which peaked with a crowd of more than 3.2m (13.6%), as the British fighter knocked out Australia’s Mark de Mori in just 130 seconds.

It will be produced by IMG, which has taken over from Giant Film & TV and Salter Brothers Entertainment, which produced the previous fight.

It was ordered by UKTV director of commissioning Richard Watsham and Dave general manager Steve North and is exec produced by Helen Nightingale.

David Haye said that he was “really impressed with the coverage and production” of his last fight and was keen to take boxing to a broader audience.

“We are confident we can continue to build on the brilliant sporting coverage we delivered in January,” added North. “The second Haye Day promises even more entertainment and even more boxing as we are able to offer more air time for fans to see boxing for free.”