“This was the best Doctor Who for years.” 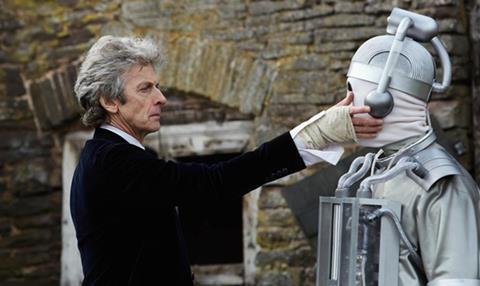 “The episode was as nerdy as superfans could hope for, without derailing the enjoyment for occasional viewers.”
Catherine Gee, The Telegraph

“What a frustration for Peter Capaldi that he finally gets to star in a first-rate Doctor Who adventure, just as he prepares to bow out. This was a bonanza of set-pieces and explosions, ending with a glorious cliffhanger. Far from being maudlin, this was the best Doctor Who for years.”
Christopher Stevens, Daily Mail

“Steven Moffat juxtaposed quintessential Englishness with the most outlandish sci-fi. He created genuinely scary imagery. And most importantly he managed to create a real sense of danger. Chris Chibnall’s been left a show which (unlike the Doctor) is currently in pretty good health.”
Jeff Robson, The i

Melvyn Bragg on TV: The Box that Changed the World, BBC2

“Lord B rounded up the great and the good at Bafta for a thorough and fascinating chinwag about what can’t really be described as a box any more.”
Sam Wollaston, The Guardian

“Saturday’s enjoyable — and less superficial than you would have feared — march through the past 60 years of television reminded us that Bragg, like his panellist Joan Bakewell, began his broadcasting career on radio. The whole exercise was wonderfully nostalgic of a time when television fretted over itself constantly.”
Andrew Billen, The Times

“Instead of laying out examples of our glittering television heritage, this one-off mainly consisted of a series of panels to discuss it, all chaired by Lord Melv. For two hours. As TV tributes go, it would have been bearable if it had been half as long. On the radio.”
Matt Baylis, Daily Express

George Best: All By Himself, BBC2

“Its focus was so narrow, you could almost believe Best was the only footballer who ever existed, and so it failed to put his life into proper context. But there were some wonderful moments. This was a TV show to watch with one finger on the fast-forward button, skimming over the heartbreak and pausing to relish the magic.”
Christopher Stevens, Daily Mail