“Unlike most wedding telly, this was a programme not about taste, expense or tantrums, but L.O.V.E.” 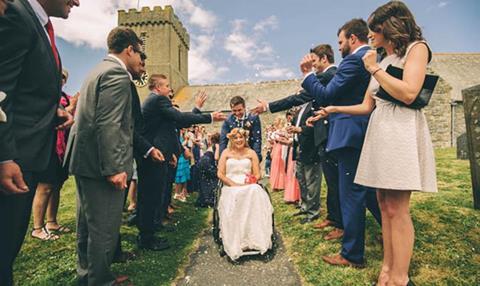 “Why are these weddings extraordinary? Because of the massive sink holes life suddenly threw into the paths of these two couples. They are extraordinary, brilliant people and it is very moving.”
Sam Wollaston, The Guardian

“The documentary was not exactly packed or very inquisitive and if its aim was to make viewers cry, it failed in my case. Unlike most wedding telly, however, this was a programme not about taste, expense or tantrums, but L.O.V.E.”
Andrew Billen, The Times

“Too much of last night’s episode felt like a string of numbered Rudolph’s, with little attempt to explain the difference between Emperor, Holy Roman Emperors, Kings, Electors and Archdukes or why they mattered.”
Matt Baylis, Daily Express

“Even Sebag Montefiore’s vivid descriptions couldn’t disguise the meagre budget or the lack of imagery to accompany his storytelling.”
Ben Lawrence, The Telegraph

“Too often the animals are half out of shot or out of focus. But if, like me, you’re happy to watch disjointed pictures of animals doing just about anything, it’s an undemanding way to pass an hour.”
Christopher Stevens, Daily Mail

“God, it is all so sad. How about some monkeys? They’re nice. Ah, a buffy-headed capuchin… oh, he’s repeatedly headbutting the camera. What is that about? Depression, aggression? I don’t know, but I don’t think I can take any more of this.”
Sam Wollaston, The Guardian

“Liz Bonnin would have had to have been the great-great-great-great-granddaughter twice removed of the Queen of Sheba to match the power of Danny Dyer’s discoveries. Sadly, she wasn’t. Nevertheless, this was an affecting episode which proved how the words and deeds of the past can wield an emotional power over the present.”
Ben Lawrence, The Telegraph

“Liz was in dread of discovering her ancestors had owned slaves. So they had but they’d also married them and been slaves themselves. It couldn’t quite match last week’s Danny Dyer descended from royalty shock but then again what could?”
Matt Baylis, Daily Express

“The show didn’t stop to ask Liz’s cousins’ names, nor what they did for a living, nor how many children they had themselves. Liz didn’t want to know, and neither did the viewer. The odd truth is that we’re not really interested in our obscure living relations. It’s the dead ones we find addictive, and that’s what makes this series so successful.”
Christopher Stevens, Daily Mail