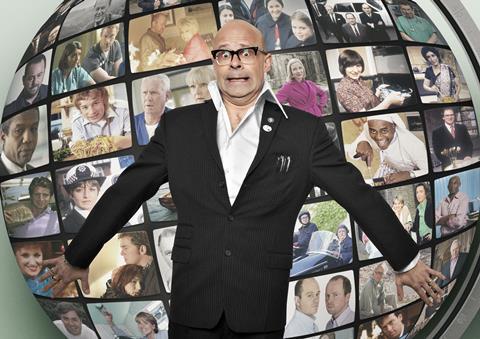 “As with much of Hill’s work, this is an absurdist collage of clips taken out of context and smooshed together for comic effect. As a fan of TV Burp, I still miss the surreal, anarchic spirit of that show. This is all very mannered and polite, for the most part, and though I know that it isn’t exactly possible in the socially distanced age, I was crying out for a couple of minor soap actors to storm the set in sumo suits and try to knock each other down.”
Rebecca Nicholson, The Guardian

“Its ambience was hampered by being a lockdown clip-show so it didn’t have the guest interaction that gave TV Burp its manic energy. But as clip-shows go it certainly didn’t phone it in. Hill’s comedic analysis of soap operas was like a sort of unhinged Mark Kermode film thesis.”
Carol Midgley, The Times

“The idea is to take us through the history of TV, each week focusing on a different genre and advising us on how to create our own version. The result was a decidedly unfunny trip through time, only interesting to those with enough time – and in the case of EastEnders, emotional resilience – to watch every soap.”
Emily Baker, The i

“Mortimer and Whitehouse: Gone Fishing is back for a third series, and in its gentle way it remains one of the best things on the Beeb. The format remains blessedly unchanged.”
Anita Singh, The Telegraph

“Aimless yet earnest discussions are one of the chief pleasures of Mortimer And Whitehouse: Gone Fishing. The fishing is just a pretext, now they’ve reached a third series. We simply want to eavesdrop while they maunder and bicker.”
Christopher Stevens, Daily Mail

“It’s the vulnerability of Bob (61) and Paul (62), who started the series after undergoing heart surgeries, that makes Gone Fishing so special. It’s a quality we don’t often let older men embrace privately, never mind with their pals on national TV, and long may it continue.”
Emily Baker, The i

“I don’t like it when they pull the poor gasping fish out of the water; it’s the only bit of this bucolic tranquilliser that isn’t relaxing.”
Carol Midgley, The Times

“Clarke is a very likeable presenter, and clearly loves his subject. It was all lovely to look at, aided by drone photography, and the closest that many of us will get to visiting the places during this year of captivity.”
Anita Singh, The Telegraph

“He squeezed into a concrete bunker called Fort Henry, overlooking Dorset’s Studland Bay, and inspected houses hewn out of sandstone rocks at Kinver Edge in Staffordshire. Interesting choices… but if you had a free pass to beat the National Trust queues, wouldn’t you opt for the big ones first?”
Christopher Stevens, Daily Mail