Hillary; You Are What You Wear; What We Do In The Shadows

“This was great documentary-making: well-woven, with changes of pace and a central interviewee with a vast collection of pant suits” 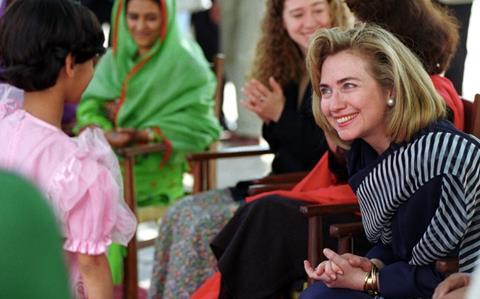 “Everything you would expect to be here is here. The problem is that this four-hour portrait has the full involvement of its subject and sanctioned cooperation of everyone around her. We have the friends who attest to her early interest in public service, the professor who talks of her pragmatic, problem-solving attitude and fierce intelligence. The Whitewater scandal is noted, but only Clinton’s disbelief at the subsequent conspiracy theories are given any airtime. The Monica Lewinsky revelations are raked over – Bill teary-eyed with regret at “the things I did for years to manage my anxieties” – as we see the former communications director marvelling at Hillary’s courage during the fallout.”
Lucy Mangan, The Guardian

“This was great documentary-making: well-woven, with changes of pace and a central interviewee with a vast collection of pant suits who seems pretty open. And we haven’t even reached the juiciest bits, ie Bill’s infidelities, yet. “I am the most investigated innocent person in America,” she said. I recommend the next three hours.”
Carol Midgley, The Times

You Are What You Wear, BBC1

“Honestly, I found it as dull as an hour spent outside a changing room in John Lewis’s, but this show has a target audience and I’m not it. If you’re the type of bloke who thinks of football, not fashion, when you hear the word ‘Milan’, or vaguely supposes that Coco Chanel is probably French for ‘hot chocolate’, you already know to avoid this show.”
Christopher Stevens, Daily Mail

“Escaping into the vacuous world of fashion might be just what we need and Rylan Clark-Neal is invariably a tonic, which probably explains why he is so often on the telly. He was the only real fresh ingredient in this overcooked recipe previously served by Gok Wan, Trinny and Susannah and the like.”
Carol Midgley, The Times

“Rylan Clark-Neal brought bags of charisma to the fashion makeover show, but let’s face it, Trinny and Susannah did it better”
Anita Singh, Telegraph

“After the excellent first season of the TV version, I sought out the film — and as so often, realised it wasn’t a patch on the telly remake. Half-developed jokes on the big screen have been fleshed out, expanded and speeded up in the sitcom. Only a cinema snob could deny that this idea becomes much funnier on television.”
Christopher Stevens, Daily Mail