“For a series about magical worlds, there’s not quite enough magic” 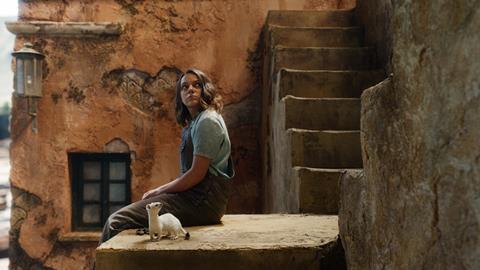 “This was a fairly flat opener, even with Mrs Coulter’s light torture of a witch with a pair of tweezers. Amir Wilson is good as Will Parry and Dafne Keen has barely put a foot wrong as Lyra, but I’m less engaged when minors carry the bulk of the episode. It is beautifully, cleverly shot even though not much happened in the new world, which looked like a sunny Tuscan village post-apocalypse, but was in fact shot in Cardiff.”
Carol Midgley, The Times

“For avid Pullman fans, the series might be a treat. The problem for the rest of us is that it lacks both the novelty of series one and the exciting narrative – it now feels very dense, which works well in a novel but less so in a TV series. Perhaps it will pick up in future episodes. It is a fine children’s drama, albeit one in a prime-time Sunday night slot and with scenes too frightening for younger kids. But what was once event TV is now a middling fantasy.”
Anita Singh, The Telegraph

“It’s hard to imagine any teenage fan of fantasy adventure, raised on Star Wars and superhero movies, sitting through even ten minutes of this coalescing sludge. It’s agonisingly slow and stagey. Every scene is static, as if the computer graphics might fall apart if the cast move around too much. His Dark Materials is meant to be redolent of Narnia and The Lord Of The Rings, but both the plot and the scenery are so creaky that it’s closer to 1980s-era Doctor Who.”
Christopher Stevens, Daily Mail

“Director Tom Hooper has free rein to imagine what Pullman’s worlds look like, and most of what he imagines works well. Writer Jack Thorne has taken some liberties in the adaptation. Smartphones, purists will say, were not in the book. It is not clear yet whether it will pay dramatic dividends, but I admire Thorne’s writing and trust him to make something of this seeming anachronism.”
Stuart Jeffries, The Guardian

“It was beautifully-shot, and bubbling with the menacing darkness: stormy landscapes, angels prophesising Lyra’s future. But also childlike wonder, as Lyra met new wide-eyed friend and ally, Will, with whom her fate was linked. As ever, Ruth Wilson was the highlight, mesmerising as Lyra’s ruthless mother Mrs Coulter, wrestling with the story’s colossal themes from mortality to morality to religion.”
Kasia Delgado, The i

The Trials of Oscar Pistorius, BBC2

“Much of this first part of the series felt like an extended apology for Pistorius courtesy of his friends, family and siblings, saying what a great guy he was and how shooting his girlfriend had left him really quite upset. Little mention of how terrified Reeva Steenkamp must have felt cowering in Pistorius’s bathroom with bullets coming through the door. This felt like a case of ‘Oscar Pistorius killed his girlfriend. Poor Oscar.’”
Carol Midgley, The Times

“It was in part a compelling true crime series. However there was an unbearable amount of focus on Pistorius’s achievements, often taking the series from true crime to sporting tribute. By the end, I’d heard more than enough about poor, traumatised Pistorius and his fall from grace and was left thinking about Reeva Steenkamp, whom this documentary, unforgivably, seemed to forget was this tragedy’s true victim.”
Kasia Delgado, The i

“What could have been an examination of the cultural convergence that makes South Africa one of the most dangerous places for women to live instead amounts to little more than a head shake over one man’s bad luck.”
Lucy Mangan, The Guardian

“If the BBC wanted to screen a four-hour tribute to an inspirational Olympian who overcame disability, why not show us the life of swimmer Ellie Simmonds or wheelchair rocket Tanni Grey-Thompson? The family of Pistorius queued up to assure us how very out of character it was for him to slaughter anyone. What exceptionally bad taste.”
Christopher Stevens, Daily Mail

“Good cheer is Giles Brandreth’s stock-in-trade, which made him an excellent travelling companion. He and Sheila Hancock have been pals for 40 years and clearly have a hoot together, particularly when they play Scrabble. It is a nice dynamic, although without the extra layers of the previous series it is no more than a jolly travelogue. Still, in this youth-obsessed age, it was pleasant to see older people allowed on TV.”
Anita Singh, The Telegraph