Max Clifford; The Story of Welsh Art; The Hunt for Gaddafi’s Billions; Drawers Off

“It was sensitive, well researched and unsensationalist” 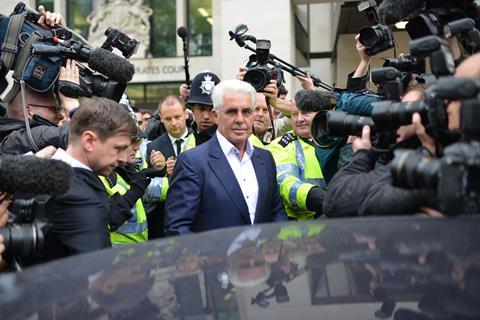 Max Clifford: The Fall of a Tabloid King, Channel 4

“There was much we already knew. However, it was sensitive, well researched and unsensationalist.”
Carol Midgley, The Times

“The film contained no bombshells, but through talking heads such as his biographer Angela Levin it illustrated the ways in which powerful men are allowed to get away with terrible things.”
Anita Singh, The Telegraph

“This focused and thorough documentary treated Clifford’s victims with the respect they deserve, each of the brave women given the time and space necessary to tell their stories.”
Emily Baker, The i

“The programme skirted perilously close to, if not hagiography, then at least glamorisation of how far and how fast you can go as a man without conscience. It was saved by interviews with the women who eventually testified against Clifford at trial. The Fall of a Tabloid King remained, overall, an essentially superficial look at a profound problem. It hinted occasionally at the greater depths, but didn’t plumb them.”
Lucy Mangan, The Guardian

The Story of Welsh Art, BBC4

“There was an absolute treasure trove here, from the gorgeous Celtic crosses to the Abergavenny Jesse, carved from the trunk of an oak tree. Happily this documentary wasn’t shouty either, with mostly unobtrusive background music and not too much talking. This is my favourite type of art programme – simple and gimmick-free.”
Carol Midgley, The Times

“Huw Stephens was an enthusiastic guide, offering his own memories of engaging with his cultural heritage as well as interviewing historians with a genuine curiosity. The most engaging element of the documentary, however, was its soundtrack – sweeping, over-dramatic and with a Celtic flair, the music did a fantastic job of invoking emotion from what was, essentially, etchings on rock or wood.”
Emily Baker, The i

The Hunt for Gaddafi’s Billions, BBC4

“The Hunt for Gaddafi’s Billions was not one of Storyville’s best, dragged down by a leaden voice-over and a strictly chronological retelling. The story and the characters, though, were worthy of a John le Carré novel. Arms dealers, shady politicians, mercenaries and secret meetings in underground car parks – all were here. It was that kind of story – the kind you’ve seen played out in fiction but rarely in real life.”
Anita Singh, The Telegraph

“Film-maker Misha Wessel set up the facts in a plodding voiceover, weighed down by her heavy Dutch accent. Unlike a Forsyth thriller, this 90-minute film didn’t build to any sort of climax. Instead, it fizzled out, with the investigators and gun-toting accountants frustrated by the complete disappearance of all that money.”
Christopher Stevens, Daily Mail

“To see your mistakes through the eyes of others is quite a test of character. Watching other people’s errors being corrected is both good fun and useful instruction. This show serves up plenty of both. At just half an hour, the format doesn’t drag, and it offers a couple of neat twists.”
Christopher Stevens, Daily Mail