Oprah with Meghan and Harry; Moving On; Driving Force; Let’s Talk About Race

“Over two jaw-dropping hours, Meghan and Harry burned their bridges while Oprah handed them the matches” 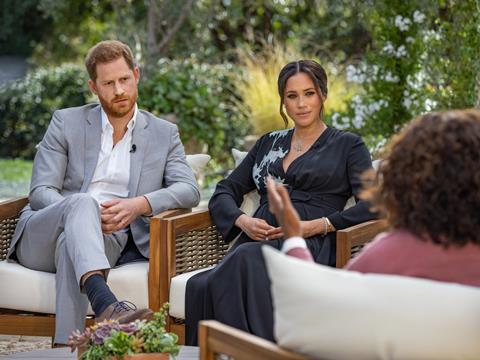 Oprah with Meghan and Harry, ITV

“Over two jaw-dropping hours, Meghan and Harry burned their bridges while Oprah handed them the matches. The interview was brilliantly edited down from three-and-a-half hours of footage so that not a minute went by without a killer quote or major revelation. Oprah is a master interviewer. She has perfected the tone and the look: a warm-hearted headmistress who loves her charges but won’t stand for any nonsense.”
Anita Singh, The Telegraph

“During two admittedly riveting hours of television (and probably one of the finest interviews of Oprah’s long career), audiences got an excruciating reveal around what it was like for an American woman of colour to be absorbed into a thousand-year-old institution and nearly be driven to take her own life because of it.”
Rachel Brodsky, The Independent

“There was something for everyone. As Meghan took her seat indirectly, un-adversarially opposite Oprah on a beautiful terrace at the luxurious LA home of a mutual friend, you could almost see the ghosts of Hedda Hopper and Louella Parsons gather to enjoy this celebrity interview of celebrity interviews by a woman whose patented blend of warmth, empathy and persistence makes her still the best in the business.”
Lucy Mangan, The Guardian

“It felt like a fringe theatre play or a GCSE creative writing exercise that borrowed bits from favourite set texts. It had too much melodrama and I slightly cringed when father and son had a fight in the churchyard before they realised they were tussling over Susie’s resting place.”
Ben Dowell, The Times

“These short stories paint their characters in broad brushstrokes, sometimes with soap-opera dialogue and imagery. The tale moved too fast to allow much space for subtlety. Instead, the three main actors shifted quickly through the emotional gears, accelerating from humour to anger before swerving into grief.”
Christopher Stevens, Daily Mail

“Plonking us right in the middle of the drama – and speeding through it at breakneck speed in an effort to round off the story in less than an hour – meant I cared very little for what became of Ben and his father. Wedding Day didn’t make for a good TV drama, but it made for decent daytime TV – much better than reruns of Homes Under The Hammer, anyway.”
Emily Baker, The i

“Investigative programmes require a sharp focus. Here, there was none. Naga Munchetty travelled around the UK ‘to understand what race and racism mean in the UK today’, a subject simply too big for the confines of a one-hour programme. If Munchetty had made an entirely personal programme, it could have been a good one. But it felt as if she was holding back from saying more. Instead, we got a meandering hour in which Munchetty spoke to people about their experiences of racism.”
Anita Singh, The Telegraph

“Judy Murray is a friendly face and offers an empathetic ear. She doesn’t fling difficult questions at Rebecca Adlington. Her approach is soft but as you might expect, she gets results. As someone with insider knowledge of professional sport, Murray can cut to the most pressing issues. Sports fans will love the depth and detail here, and non-sports fans will be amazed by the otherworldly dedication that excellence of this level requires.”
Rebecca Nicholson, The Guardian