Queens of the Street; Coronation Street; Meet the Richardsons at Christmas; Inside the Plaza

“There seems no limit to how often viewers will happily watch black-and-white clips of Ena Sharples in her hairnet, gossiping with her cronies” 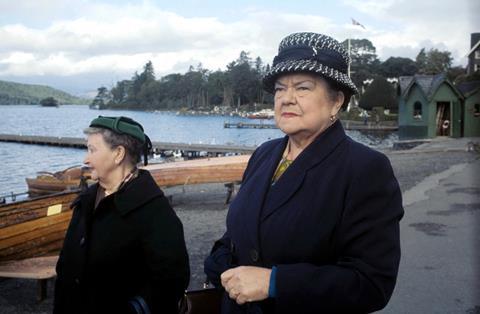 Queens of the Street, ITV

“The Street’s battle-axes and matriarchs have already been saluted this year in a collection of retrospectives, hastily compiled during the first lockdown when it was impossible to film new episodes. But there seems no limit to how often viewers will happily watch black-and-white clips of Ena Sharples in her hairnet, gossiping with her cronies Minnie Caldwell and Martha Longhurst. And there’s endless pleasure to be had in glimpsing Doctor Foster’s Suranne Jones as Karen McDonald or Happy Valley’s Sarah Lancashire when she was known only for being daffy barmaid Raquel.”
Christopher Stevens, Daily Mail

“I loved Queens of the Street, a retrospective on the dazzling, ball-busting matriarchs who have always set Corrie apart. From Ena Sharples making men tremble with one look from her flinty eyes to Vera Duckworth terrifying her husband, Jack, by suggesting that they have “an early night”.”
Carol Midgley, The Times

“The problem with Queens of the Street, an hour-long programme celebrating Coronation Street’s great female characters, is that an hour wasn’t enough. They could have filled that time just with one-liners from Blanche Hunt, like her telling Deirdre: “Good looks are a curse. You and Ken should count yourselves very lucky.””
Anita Singh, Telegraph

“The 60th anniversary episode of Coronation Street featured Ken Barlow’s Tiananmen Square moment. It was a digger, not a column of tanks, and he was trying to stop a property developer with designs on the local brewery, not the People’s Liberation Army. Still, you could see where they were trying to go with it.”
Anita Singh, Telegraph

““We are Weatherfield, hear us roar!” In a call back to the 40th anniversary of Coronation Street (when someone tried to tarmac over the cobbles),the soap’s longest-standing resident, Ken Barlow (William Roache), spent the hour-long special episode defending his home from nefarious property developer Ray Crosby who wanted to demolish Roy’s Rolls to make way for a new block of flats. Perhaps not the most thrilling story to mark 60 years since the very first episode, but one that gave us some typically comic moments including Ken’s accidental impression of the Tiananmen Square “tank man” as he stood in front of a bulldozer, plastic shopping bags in each hand.”
Emily Baker, The i

Meet the Richardsons at Christmas, Dave

“It was the more improvised moments, from their real-life memories, which drew laughs. Watching Beaumont’s stint on a celebrity version of University Challenge led the couple to argue over who was the most intelligent, while their trip to Jools Holland’s Hootenanny to watch The Proclaimers reminded the couple of the time a drunken Beaumont invited the band to spend Christmas with them. “Luckily they didn’t turn up ‘cause we weren’t prepared,” she said, deadpan. While the narrative was a little disjointed, as usual there was refreshing honesty and realism in this “portrayal” of a relationship, where calling each other “miserable t***s” and bickering over Boggle is tantamount to saying, “I love you”. It was just like spending Christmas at home.”
Emily Baker, The i

“I wanted to hate Meet the Richardsons at Christmas for the obvious reason that it is a smug, cliquey, comedians’ circle jerk that is written as self-deprecating yet is anything but. It is a sort of Curb Your Enthusiasm set in Hebden Bridge, but lacks Larry David’s bite and willingness to offend and seems very, very pleased with itself. But I can’t hate it because even though I know it’s scripted and there probably isn’t an authentic sentence in it, it makes me laugh, dammit.”
Carol Midgley, The Times

“Jon Richardson seems to treat this as a time for re-gifting, or recycling, his old jokes. One about a ‘sad-vent calendar’, with depressing messages behind the 24 doors, was reused from an old episode of C4’s Eight Out Of Ten Cats Does Countdown. He didn’t even try to pretend it was new. That’s hardly entering into the spirit of things.”
Christopher Stevens, Daily Mail

Christmas in New York: Inside the Plaza, Channel 4

“What might once have induced an enjoyable mixture of wistful sighs (Why is my life so bare of mezzanines, mosaic floors and stained-glass ceilings? To say nothing of its dearth of Flemish oak panelling), screams of delighted disbelief and expressive eye-rolling, has a slightly different effect at the end of a year that has meant privation and pain for so many. In a year that has brought clarity in so many ways to the profound and growing gulf that exists between the haves and the have-nots; it is impossible now to ignore the screaming entitlement of guests, for example, in contrast to the lives of the 600 people serving them.”
Lucy Mangan, The Guardian