“This was dispassionate analysis, and it was all the more riveting for it” 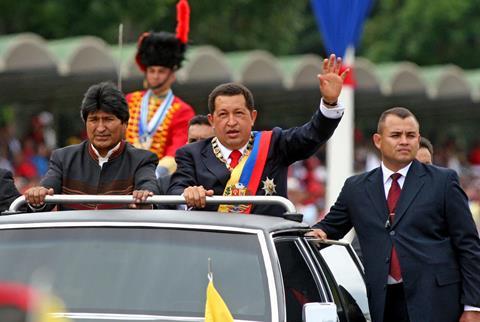 “This excellent documentary used the solid, old-fashioned format of splicing old news footage with expert commentators, some of whom had worked with Chávez and fell under his populist spell, but now, with the benefit of hindsight, see the problems with ‘romantic revolution’. It felt, two decades after Chávez came to power, like an eloquent parable.”
Carol Midgley, The Times

“It was a fascinating study, depicting Chávez as both a genuine socialist revolutionary and yet the ultimate populist despot. Yet to its credit, Revolution in Ruins came neither to praise Chávez nor to bury him. This was dispassionate analysis, and it was all the more riveting for it.”
Benji Wilson, The Telegraph

“A compelling account of how populist dictator Hugo Chavez rose to power. This documentary was expertly collated, drawing on a wide selection of clips and firing them at us rapidly.”
Christopher Stevens, Daily Mail

“Academics, journalists, friends, former allies, advisers and followers were well-chosen and offered a measured, considered and in-depth evaluation of the man’s life and legacy.”
Sarah Carson, The i

“This may be a documentary about a man leading a specific revolution, but it’s also, unfortunately, a story as old as civilisation: how power corrupts men, idealism gets warped, and the cult of personality ends up a one-way track to megalomania.”
Chitra Ramaswamy, The Guardian

“Last night’s episode was better than the first. It focused slightly less on the daft insider-trading shenanigans and more on Sam’s home life and ruinous gambling addiction, which is what I believe is termed ‘relatable’. But much of it still stretches the credulity like old knicker elastic.”
Carol Midgley, The Times

“Sheridan Smith is the only believable thing about a show that purports to be a slice of real working-class life. The plot is lamentable, the depiction of a stockbroking firm laughable and the dialogue utter twaddle.”
Benji Wilson, The Telegraph

“What began, at least half-heartedly, as a show with a mission to explore the relationship between father and son has now become an unabashed holiday. As they visited a NASA space training centre, they might as well have been pottering around a pier arcade.”
Christopher Stevens, Daily Mail