SATURDAY: Strictly Come Dancing rocketed to a series high and continued to boost Doctor Who. 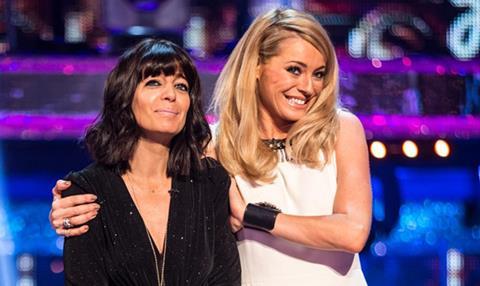 The celebrity dance contest pulled in an audience that was nearly 800,000 viewers above its previous series high. It was also up half a million viewers on the equivalent episode last year.

The programme peaked with 10.7m (48.5%) over the five minutes from 7.55pm, according to overnight Barb ratings data supplied by overnights.tv.

Strictly’s strong performance boosted Doctor Who, which also pulled in a series high. The sci-fi drama drew 4.6m (22.2%) from 8.20pm to 9.10pm and is clearly benefiting from the Strictly inheritance in its later slot.

Both shows tackled the Rugby World Cup on ITV, where New Zealand’s quarter final demolition of France averaged 4m (19.7%) from 7.30pm to 10.15pm.

The ninth series of Jonathan Ross’ chat show launched with an audience well down on the 2.3m (11.1%) that tuned into the eighth series debut in January.

It was Ross’ second outing for the channel in a night after it aired movie special James Bond’s Spectre – with Jonathan Ross to 2.2m (10.5%) over the hour from 6.30pm.