Suffragettes with Lucy Worsley; Versailles; The Queen’s Coronation in Colour 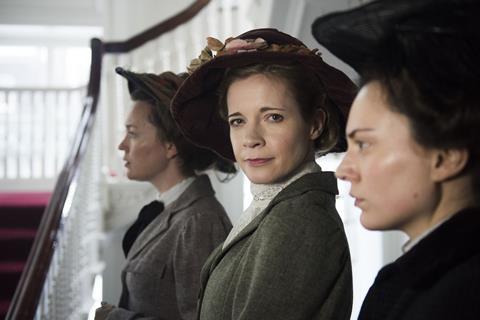 “Suffragettes with Lucy Worsley brilliantly treads the line between Reithian historical documentary and vividly textured narrative. The pyrotechnics and stunt work you would more usually associate with big-budget drama are used judiciously to bring this never-more-relevant story to life.”
Julia Raeside, The Guardian

“Despite being one of those who rolls their eyes whenever Worsley pops up dressed as Queen Victoria or Little Bo Peep, I enjoyed the immersive nature of this densely packed documentary. The dramatisations were vivid and handsome, with Worsley rubbing shoulders with the suffragettes as they spat at coppers and chained themselves to railings. All credit to the director, Emma Frank, for making Worsley’s sharp mind and lust for dressing up seem like the most natural of bedfellows.”
Chris Bennion, The Times

“The programme built towards a satisfying narrative climax as it headed towards the Great War and the suffragettes’ actions increased in anger and daring. It may have been a strange hybrid but 100 years on this programme gave the suffragettes the one thing they once lacked and the only thing they wanted – a voice.”
Benji Wilson, The Telegraph

“There is something so charmingly engaging about Lucy Worsley — who wasn’t afraid to criticise the Suffragettes for their violence. She certainly makes history come alive but at 90 minutes the programme was way too long. And, despite trying hard, it still felt like a history lesson we’re all familiar with — not least because the BBC had a glut of documentaries on the suffragette movement in February.”
Claudia Connell, Daily Mail

“Not everyone, I know, is a fan of Lucy Worsley’s style of programme-making. But more conventional history programmes are often tucked away or given a low profile, whereas Lucy’s secured a 90-minute prime-time slot on mainstream TV for one of the most important stories in our history, served up straight after EastEnders. It’s hard to argue with that.”
Mike Ward, Daily Express

“Compared to the earthier, more romantic and all-round more engaging Poldark, Versailles is cold and curiously uninvolving. Indeed, it’s rather like the titular palais: ravishing to look at but ultimately an expensive folly.”
Michael Hogan, The Telegraph

“How on earth a drama that contains zingers such as ‘Poppycock! Her arse is tight enough to uncork a wine bottle’ can be quite so dull is beyond me.”
Chris Bennion, The Times

“Versailles is glamorous, highly camp and corny. And, despite the dodgy accents, it does have a strange allure — even if it does feel more like a Carry On film than a historical drama.”
Claudia Connell, Daily Mail

The Queen’s Coronation in Colour, ITV

“Alexander Armstrong’s cheery perusal of an event that brought the Queen, via the newly popular medium of television, closer to her subjects than ever before, was a visual feast. I wasn’t quite sure what having a celebrity presenter brought to proceedings, but if you have to have someone wandering around Westminster Abbey looking wistful then better Armstrong than a gurning perma-tan from Made in Chelsea.”
Benji Wilson, The Telegraph

“As a rule I adore this kind of stuff, and there are few TV chaps more likeable than its presenter, Alexander Armstrong. But I fear we’re becoming over familiar with much of this archive footage, as well as the associated anecdotes.”
Mike Ward, Daily Express