“Cramming in so many perspectives made for an admirably even-handed, if cluttered, hour that certainly served to underline the nuances and complexities of the issue.” 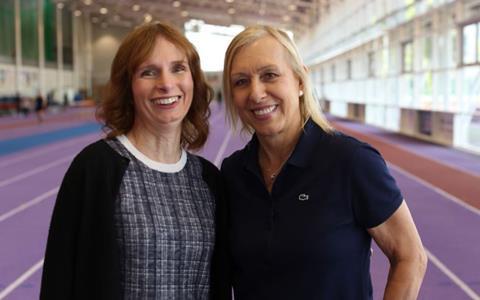 “Cramming in so many perspectives made for an admirably even-handed, if cluttered, hour that certainly served to underline the nuances and complexities of the issue. Its breadth of voices ensured it wouldn’t infuriate as many people as Navratilova might have feared.”
Gabriel Tate, The Telegraph

“Navratilova was as meticulous in her research as she was on the tennis court. She reached no firm conclusion over whether it is fair to allow trans-women to compete in female sports, saying it was impossible to make any meaningful rules until more research is done (this seemed right).”
Carol Midgley, The Times

“She’s too intelligent and civilised to provoke a face-to-face shouting match (that is more John McEnroe’s style). And she had to tread carefully, since several of the trans sportswomen seemed on the verge of emotional breakdowns. As a result, she was unable to reach any real conclusions.”
Christopher Stevens, Daily Mail

“This documentary’s weakness lies in Navratilova’s reluctance to examine or question what she means by ‘fair’. Is fairness about equally weighting the two sides in any competition? Or is it about finding a means to allow talented sportspeople to compete? Until the science is there, this is the pressing question that sport needs to answer.”
Barbara Speed, The i

“I’m pretty sure I watched the finale of Summer of Rockets, but I could have been drunk. Same effect. It was like an exotic fever dream, veering off all over the place, storylines tailing off; exquisite sometimes, but at others crazier than a wet hen. I have loved some of Stephen Poliakoff’s semi-autobiographical drama, but this ending was disappointing.”
Carol Midgely, The Times

“Summer Rockets should have been terrible: baggy, meandering, and stuffed with on-the-nose parallels with today’s politics. But it charmed me. What could be seen as the series’ weakness is also its virtue: it mixes storylines of debutante balls and confiscated toys with secret agents and shoot-outs at airfields.”
Barbara Speed, The i

“If you find the concept of ‘adulting’ as infantilising and sexist as I do, you might want to bugger off and do some quiet, unscripted adulting of your own right now. If you embrace the toddlerisation of everything from politics to smoothies, this is all ‘very relatable’, to use the appropriate reality-TV terminology.”
Chitra Ramaswamy, The Guardian