“An exemplary, morally-taxing, emotionally-devouring series.” Read on for the verdict on last night’s TV. 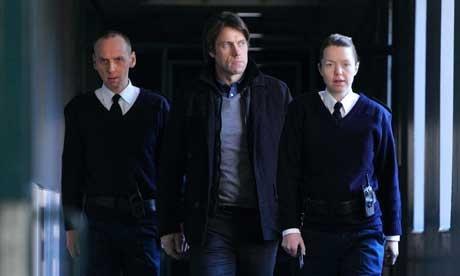 “Accused has added a new variation to television’s continuing exploration of the question mark hook. [Jimmy McGovern] writes for bad and weak characters as persuasively as he does for good, strong ones, which means that the hurdles he sets up for his protagonists to leap over feel solid, and can bark the shins painfully if they hit them.”
Tom Sutcliffe, The Independent

“The disjointed structure made for a few surprises, and every unsparing detail was finely wrought…all seemingly designed to drive you to the depths of despair. The performances were all brilliant, but in particular Maxwell Martin managed to make Tina both vulnerable and implacable.”
Tim Dowling, The Guardian

“It has been a great series, exquisitely written and masterfully acted.”
Matt Baylis, Daily Express

“Whitehall’s character wobbles a little between a knowing cynicism and an over-contrived ingenuousness, but the comedy certainly has its moments.”
Tom Sutcliffe, The Independent

“A game of unhappy step-families played on. But, as from many ITV dramas, what we took away was an ad-friendly ambience of affluence.”
Andrew Billen, The Times

“It may come to be seen as an explanatory artifact of our time, a time when so few people cooked that watching someone knock up a sponge was considered prime-time entertainment. This particular series also serves as a faithful record of our recent crappy summer.”
Tim Dowling, The Guardian