“An amazing spectacle and an amazing piece of filming.” Read on for the verdict on last night’s TV. 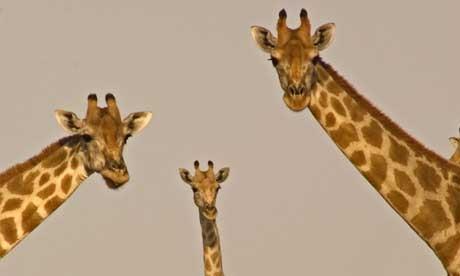 “The good news about Africa, BBC1’s new six-part series, is that they’re still finding sights that stun you. This is partly down to technology. As you watch the breath of a drongo condense on the morning air or thrill to a giraffe duel, you’re unwittingly admiring the latest developments in lenses and distance filming.”
Tom Sutcliffe, The Independent

“Has Attenborough’s commentary become more grandfatherly, I wonder? Certainly he’s not shy of slipping into a bit of anthropomorphism. I don’t mind; it makes it warmer, friendlier, more like having a bedtime animal story read to you. Read by the nation’s favourite granddad… What I do mind is the incessant music, telling me how to feel… The music reaches a climax of absurdity when a young male giraffe shows up to challenge an old bull giraffe. Suddenly it sounds like the film score of a western… The fight itself is extraordinary, though: the two giraffes neck-thwack the crap out of each other, an amazing spectacle and an amazing piece of filming.”
Sam Wollaston, The Guardian

“Africa doesn’t have to sell itself too hard. For a start it’s a series about a fascinating part of the world and it features David Attenborough. It’s also being shown in the depths of winter when there are few sights more attractive than a sun-kissed savannah or baking desert such as the Kalahari in south-west Africa.
Matt Baylis, Daily Express

“What made the first Africa special was its insistence that it had not only and with infinite patience watched the continent’s fauna but had discovered something new. By use of ‘starlight camera’, the crew filmed a colloquy of rhino by a water hole. The cantankerous, antisocial beasts that zoologists know by day, by night turn into chinwaggers, there for the craic not the water. ‘We had no idea rhinos met to socialise and build friendships like this,’ said Attenborough, mission accomplished.”
Andrew Billen, The Times

Secrets of a Good Marriage with Sharon Horgan, C4

“Horgan was the best thing about this – undercutting and funny and prone to sly little glances at the camera just to reassure you that she thought it was all as nuts as you did. In fact, you could say that she was the only good thing about it, since the people she went to talk to were pretty predictable in their diversions from the deep rut of marital normality.”
Tom Sutcliffe, The Independent

“Secrets of a Good Marriage with Sharon Horgan was more amusing than useful because the people the comedy writer and actor talks to are, well, freaks. There’s a pair of sex maniacs. And another lady who has a lot of sex with just about everybody except her husband.”
Sam Wollaston, The Guardian

“You could say, from watching the comedienne’s research, that there is a kind of scale of togetherness in marriage. At one end are couples like the rather off-putting Kavida and Roland, whose vigorous exploratory sex life was a major part of their personalities as individuals and as a couple… At the other end of the spectrum are pairs like Steven and Shelly, who have put aside mutual understanding or equality in favour of a seemingly unequal marriage.”
Matt Baylis, Daily Express