“A comedy drama that really delivers both.” Read on for the verdict on last night’s TV. 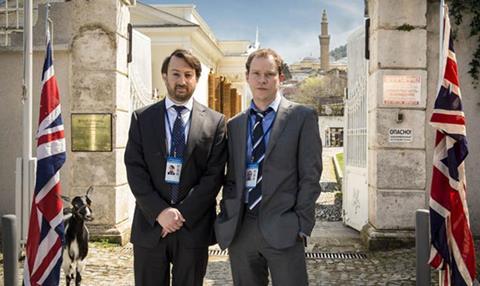 “This was no Carry On Foreign Office. It was a true and sensitive portrayal of the surreal world of the middle-ranking diplomat, and was made only the more accurate by its comic exaggeration.”
Jake Wallis Simmons, The Telegraph

“The greatest strength of Ambassadors is its cast, and Robert Webb was a particular pleasure to watch. After so long playing a total wally, it was simply fascinating to see him as a competent, practical employee.”
Ellen E Jones, The Independent

“It’s not lol-tastic. More of a drama with jokes than jokes strung together with some kind of story… The overall feel is sharp but gentle, a Gillette Fusion Proglide of a comedy… The Ambassadors didn’t blow me away, but it grew on me as it went along. “
Sam Wollaston, The Guardian

“Everything was in place for a first-rate comedy drama. But it kept falling flat. The editing dragged. The writing was loose. The timing was laboured. Mitchell and Webb, who have co-starred in Peep Show, have an almost telepathic comic rhythm together, but clumsy cuts and mistimed shots kept ruining it.”
Christopher Stevens, Daily Mail

“It all seemed a bit like a Borat knock-off, these scary Kazakh-ish people with their guns and vodka and bleak customs. However, if you stayed beyond the first few minutes it flowered into that rarest of species, a comedy drama that really delivers both.”
Matt Baylis, Daily Express

“Comedy-drama is a funny fish that can call between the two stools – neither having enough jokes nor enough jeopardy to propel a story. Ambassadors hovers on the edge of this problem… File under See Where It Goes Next Week.”
Alex Hardy, The Times

“This production buzzed with twists and wistfulness as it toured issues from world peace to faded egos. Hats off to the adapters, Marl Gatiss and the actor Ian Hallard, for packing so much in… It will pain viewers to be without this stylish, eccentric soup.”
Alex Hardy, The Times

“With the simple device of three sealed envelopes, a trick worthy of Dame Agatha at her finest, Mark Gatiss produced a triumph. If there isn’t a Bafta for Best Silk Purse From A Sow’s Ear, there should be.”
Christopher Stevens, Daily Mail

“Poirot is Poirot, and watching it makes one feel that all is right with the world… When the final episode airs next month, Britain will doubtless become a slightly less colourful and reassuring place.”
Jake Wallis Simmons, The Telegraph

“Poirot still has all his irritating habits: talking about himself in the third person, fastidious neatness and, sad to say, mes amis, a tendency to litter conversation with unnecessary French phrases, as though he were auditioning for a walk-on in ‘Allo ‘Allo!, not investigating a murder. Yet there is something undeniably comforting about ITV’s unchanging detective.”
Ellen E Jones, The Independent

“All lovely stuff, as you might expect: friends reunited, beautiful interiors, unwavering performances. It was just a shame that the solution to this richly complex mystery was that age-old cheapest of cop-outs: ‘I did it all because I’m completely mad.’”
Matt Baylis, Daily Express

“Starring none of its original cast, E4’s Asbo superheroes drama Misfits has become the Sugababes of the TV world. That it remains so popular is therefore a testament to not only the inventive and scabrously worded script but also the zesty new cast for whom replacing the likes of Robert Sheehan and Iwan Rheon was no easy task.”
Patrick Smith, The Telegraph