“It made me laugh, and for a genre that many have dismissed as dead and buried, that’s no mean feat.” Read on for the verdict on last night’s TV. 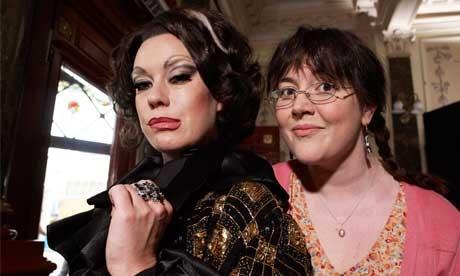 “I’m not going to describe what I saw, mainly because it was through tears as I lay on the floor and laughed my legs off… There is nothing to gladden the heart more than two women on telly doing really, really stupid, really, really brilliant, really, really funny stuff.”
Lucy Mangan, The Guardian

“It was all a lot of fun. Indeed, rather like a modern-day Morecambe and Wise, one of the nicest things about Anna and Katy was how much its protagonists seem to be enjoying themselves… However, some skits were simply absurd and no doubt inspired by Reeves and Mortimer, who both Crilly and Wix have cited as their comedy heroes… By the end I wanted less lampooning of television itself and more original material. Still, it’s a sketch show that made me laugh, and for a genre that many have dismissed as dead and buried, that’s no mean feat.”
Emma Gosnell, The Telegraph

“Anna & Katy included a skit about a dinner party at which no one could recognise a joke until it was laboriously pointed out to them, at which point they roared completely out of proportion to the feeble quip that had been made. It was quite an interesting sketch but not terribly funny, which was also true of most of the programme… These people can deliver a funny line, but they were struggling with a serious shortage of that particular commodity.”
Tom Sutcliffe, The Independent

“Against expectations, Anna & Katy hit me on the funny bone. I am not sure how gifted Anna Crilly and Katy Wix are as performers, but as writers (aided by a posse of blokes) they have a sense of heightened absurdity clearly born of watching far too much TV.”
Andrew Billen, The Times

“Jezza Neumann has spent his career making haunting, painful films about the otherwise silent sufferings of children around the world, from the Bafta-winning Dispatches documentary, China’s Stolen Children, in 2007 to Poor Kids, about child poverty in the UK, two years ago. You can only hope that this latest work, spotlighting a handful of the millions going cold, hungry and humiliated in one of the richest nations on earth, brings him plaudits and further funding as well as condemnation of those responsible for his subjects’ plight.”
Lucy Mangan, The Guardian

“If there’s one thing this programme left me with it was a sense of being very lucky. I could have done without Sophie Okonedo’s rather leaden narration, but this was engaging, thought-provoking television.”
Emma Gosnell, The Telegraph

“The director Jezza Neumann painted a picture of America in its worst depression since the Thirties using the finest of brushes, children whose parents had fallen, with shocking speed, into poverty… With, we were told, 16 million children now living poor in America, and half a million more declared homeless since 2007, it was difficult to know how to take Kaylie’s suggestion that her mother had ‘made a wrong turn’… I want Neumann to return in 20 years and find out how Kaylie is doing, and how she votes.”
Andrew Billen, The Times

“The Saturday Night Live stalwart Amy Poehler plays Leslie Knope, the hopelessly naive, indefatigably optimistic, quiveringly vulnerable deputy director of the eponymous government department in the fictional town of Pawnee, Indiana… That she is surrounded by idle, disaffected colleagues, a boss who doesn’t believe in government and mutinous interns does not turn her from her path. It’s warm, uncynical and funnier than I can tell you.”
Lucy Mangan, The Guardian

“The received opinion about Parks and Recreation is that it doesn’t get really good until the second series, which is promising because the opening two episodes of season one were pretty damn funny… And Poehler is great, very adept at the little tremor in facial expression that is the stock material of the mockumentary, as pretended control gives way to unconcealable panic.”
Tom Sutcliffe, The Independent

“What Michael Grade was interested in was the embedded human need to crack wise. What the director seemed to be interested in was getting in the way as often as possible, quite often with members of the public mangling perfectly blameless jokes… Once the programme had calmed down a bit – and got away from the philosophising about the nature of comedy that also bogged down the opening – it proved interesting.”
Tom Sutcliffe, The Independent

“Discovering that the Tudors told ‘knock knock’ jokes and a medieval compendium contained a gag about a drinker who finds a fly in his wine glass brings the past and present closer and tells us something important about the human condition. Strive as we might, erecting empires and zooming to the stars, we still find the idea of breaking wind as funny as they did back in ancient Sumeria.”
Matt Baylis, Daily Express

“Ricky Gervais’s unfathomably bad care-home comedy Derek, which last night reached the end of, sadly, only its first season, last night abandoned all restraint in its keenness to make us cry… All of what remains of Gervais’s satirical genius is poured into Dougie, who gave a neat speech on the point of Comic Relief being to cheer us up that we have Tesco Metros on our doorstep.”
Andrew Billen, The Times