“It was like a Frank Capra movie with Burnley accents.” Read on for the verdict on last night’s TV. 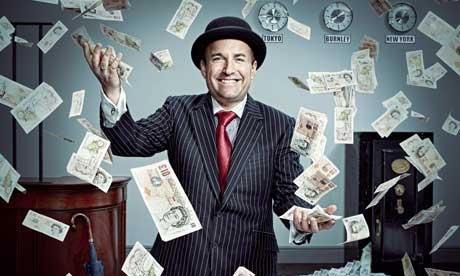 “Fighting the fat cats took all the sprawling, multitudinous issues, problems, betrayals and injustices that exist between high-finance Them and the rest of Us and distilled it into its purest form – one man against one agency. And he won. If we can only replicate the effect a millionfold across Europe.”
Lucy Mangan, The Guardian

“Dave’s basic idea was so good, and his manner so infectiously can-do that you simply wanted to cheer when the FSA eventually abandoned its pettifogging and let him take savings again. It was like a Frank Capra movie with Burnley accents.”
Tom Sutcliffe, The Independent

“Bank of Dave is Channel 4’s periodical series of unpaid adverts for David Fishwick, a gobby minibus magnate who set up a little bank in his home town of Burnley… In the end, the FSA ran out of excuses and let him get on with it. Up on a cloud somewhere, George Bailey is weeping tears of joy.”
Andrew Billen, The Times

“Very interesting viewing… It’s somehow indicative of how low this country has sunk that far from hailing Dave’s success and encouraging a raft of similar local banks, the powers that be loathe him.”
Virginia Blackburn, Daily Express

“I wasn’t expecting much from the opening episode of an ITV fly-on-the-wall documentary called The Wedding Shop but it turned out to be a little belter… What threatened initially to be another addition to the point-and-snigger school of film-making soon revealed itself to be a respectful and rather lovely meditation on human frailties.”
Lucy Mangan, The Guardian

“We may need a hideous neologism to describe this new hybrid of documentary and lobby-group mobilisation – activainment perhaps, or televactivism. But that it can work seems undeniable. I’ll be checking the label next time I pick up a pack of prawns.”
Tom Sutcliffe, The Independent

Child Of Our Time, BBC2

“Child has always had a schmucky soap opera element to it, but its strength was Winston’s analysis… In this series, the sociology and psychology had been replaced by Winstonian platitudes, birthing replays, emotive music and parents queuing to tear up. Sentiment had replaced sense.”
Andrew Billen, The Times

“This was a darkly atmospheric thriller, with an imperfect anti-hero at its centre, brilliantly played by Iain Glen.”
Virginia Blackburn, Daily Express