“Miller conducted his interviews with Hancock’s old friends and colleagues with a quiet enthusiasm and a neat, Therouxesque eye for a gentle but probing question.” Read on for the verdict on last night’s TV. 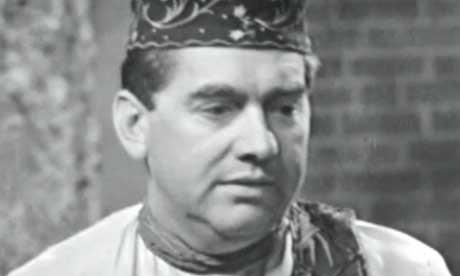 “This was not a simple celebration or sepia-tinted love-in. It was a psychological profile, a full portrait of the artist named Tony Hancock. Miller conducted his interviews with Hancock’s old friends and colleagues with a quiet enthusiasm and a neat, Therouxesque eye for a gentle but probing question.”
Tom Meltzer, The Guardian

“It was the smaller corners of this tribute to a comic genius that made it worth watching… Most of the people Miller met delivered a small nugget of gold for Hancock fans.”
Arifa Akbar, The Independent

“Beneath the theatricality, this was informed and impassioned stuff. Dr Michael Scott has made five documentaries about the Greeks now for the Beeb, and on this evidence he will be making them for as long as he has facts – or boyhood memories, or whatever they are – to share.”
Tom Meltzer, The Guardian

“The passionate classicist Dr Michael Scott showed how the earliest theatrical productions were part of a cultural revolution… Our soaps, with their elaborate murders, blackmails and tangled love affairs, might seem very far removed and perhaps they don’t question society as bluntly as they did in the Sixties and Seventies. The themes are still there, though.”
Matt Baylis, Daily Express

“I can’t help thinking that the producers are intentionally throwing us a few red herrings this series, with all the skill and dexterity of Agatha Christie. Last week, for example, Rob’s scientific precision was presented as the way to a reliably perfect bake – but this week, he struggled to show much true creative flair with his decorative loaf.”
Neil Midgley, The Telegraph

“Watching this alarming documentary, you got the sense that America has always needed demons, some kind of ‘enemy within’, to fear and to fight, and when there hasn’t been an obvious target, a few sick individuals have sufficed.”
Matt Baylis, Daily Express

“There are many reasons to applaud Top Boy – and not just for introducing to middle-class living rooms the street salutation ‘Wagwan’… This second series confirms what the first one hinted at: Ashley Walters, who came to prominence with the middling grime collective So Solid Crew, is a far better actor than he was a rapper.”
Ed Potton, The Times

“Nicholas Lyndhurst, unlike his co-stars, doesn’t ham it up at every opportunity. Set against Amanda Redman’s narrowed eyes and Dennis Waterman’s comedy frown, he was a monument to subtlety.”
Ed Potton, The Times