“With moral compasses constantly flaring, misdirecting and realigning, this is another dizzingly strong piece of work from the Netflix team.” 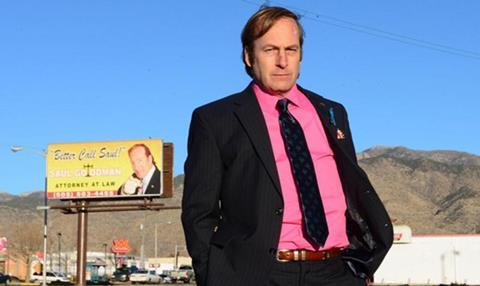 “Of course fans of Breaking Bad will have the most rewarding time with Better Call Saul. However, there are hugely rewarding surprises for non-fans too, nestled in the crisp visuals and dark comic sensibilities that soak the series. With moral compasses constantly flaring, misdirecting and realigning, this is another dizzingly strong piece of work from the Netflix team.”
Alex Hardy, The Times

“You don’t have to know anything about Breaking Bad to enjoy this show, though if you do, there are plenty of in-jokes to relish. It’s brilliantly written. Shows like Better Call Saul guarantee an exciting future for television… even if it’s barely TV any more.”
Christopher Stevens, Daily Mail

“With Odenkirk proving himself to be the leading man we had hoped he could be, and the masterful source material from Gould and Vince Gilligan, it is positively bubbling with potential.”
Catherine Gee, The Telegraph

“Better Call Saul was always going to sink or swim in Odenkirk’s central performance, and he certainly proves up to the task of fleshing out the two-dimensional Saul of Breaking Bad.”
Gerard Gilbert, The Independent

“Asylum could be a good sitcom, but they need more than just a high-concept idea for a character in a place. You can’t just add some occasionally funny lines, rooted in neither character nor place, to fill the time between the opening and closing titles and hope for the best. It won’t stand up.”
Julia Raeside, The Guardian

“Though the configuration was sound, it didn’t work. Essentially, this was a study of boredom, and, without the very best writing, boredom is hard to make interesting. It did have that half-baked feel – a good idea that, on further inspection, probably doesn’t have legs.”
Benji Wilson, The Telegraph

”While you can imagine Dan Hern’s character in the likes of mockumentary-style satire such as The Thick of It the rest of the cast are caricatures. This is a satirical comedy for our times – more BuzzFeed than Private Eye – but with more substance than comic memes of marsupials to keep us going back for more.”
Sally Newall, The Independent

“One course included live snakes to engender a “shared pain” response, shown to bond people together. He might as well have thrown bricks at their heads and told them the restaurant was on fire for all the fight or flight confusion that ensued. It may not have been much fun to eat, but it was entertaining to watch.”
Julia Raeside, The Guardian

“This was all very exciting but with the added yuck factor of watching several couples feeding each other and, apparently, becoming more amorously inclined as the dinner went on. If anyone tried that in my restaurant, I’d turn the fire hose on them. In Heston’s restaurant, of course, they’d turn the fires hose on you and serve it up as pudding.”
Matt Baylis, Daily Express

“You can picture the Valentine’s Day development meeting. ” Hang on a minute – do oysters, caviar, chocolate, figs and the like really get people going? Let’s get Heston on it.” The result was this entertaining, if voyeuristic, documentary fronted by chef-cum-scientist-cum-historian Heston Blumenthal.”
Sally Newall, The Independent

“Olivia Colman in a paddy makes German Chancellor Angela Merkel look positively mumsy. In fact, the solution to the Ukraine crisis could be to have Olivia fly to Moscow and give President Putin a talking to. He’d soon behave. It’s just a shame she hasn’t boxed David Tennant’s ears and told him to stop mumbling.”
Christopher Stevens, Daily Mail

“Broadchurch’s second series has at times sagged disastrously but with last night’s sixth episode you sense it may be over its mid-season slump. The performances remain consistent and compelling – compelling enough even to allow you to forgive the ludicrously overblown photography, which looks at times like the director has just discovered Instagram.”
Benji Wilson, The Telegraph

“Too many threads, not enough connection to the main players. However will Chibnall conclude it? To satisfy the appetite he whetted with his neat award-wining first series he’s got a lot to live up to in the final two episodes.”
Matilda Battersby, The Independent

“It was TV to feast on: grub, more grub, exotic surroundings, a lovely host and a gentle look at roots, exile and belonging.”
Matt Baylis, Daily Express

“Can we just stop now with this structured-reality bobbins please? In fact this foreign foray seems if anything more vacuous than its UK-based antecedents. Preening, pants and recruitment chat. It’s hardly the picture Frank Sinatra built.”
Alex Hardy, The Times