“Not just a mid-life-crisis comedian searching for a new purpose in life.” Read on for the verdict on last night’s TV. 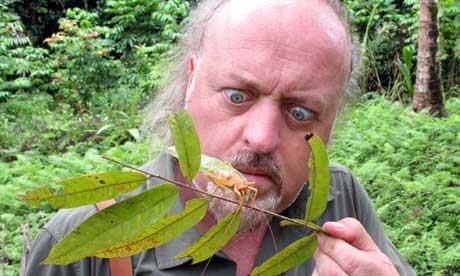 “He looks the part, in a cream suit and Panama hat, with a local carrying his heavy, old-fashioned suitcase; he could be a Victorian naturalist himself… And he’s not totally unsuited to the job, in fact; not just a mid-life-crisis comedian searching for a new purpose in life.”
Sam Wollaston, The Guardian

“Bailey goes where Wallace went and does what he did, from eating durian fruit to catching butterflies. He looks wild-haired and flushed throughout, which might be down to the humidity and heat but I suspect has quite a bit to do with simple excitement.”
Tom Sutcliffe, The Independent

“I will normally preface a review of this type of programme by a having a good moan at the idea of celebrity presenters, picked for the job because they are faces rather than because they are renowned experts. I’ll make an exception for actor and comedian Bailey, not just because he’s a delightful person to spend an hour in the jungle with but because his presence and enthusiasm underline the point about Wallace.”
Matt Baylis, Daily Express

“What really won me over was the comedian’s passion; he was genuinely moved by his experiences and indignant about Wallace’s lack of recognition.”
Lucinda Everett, The Telegraph

“This Morse prequel is more interesting than the Lewis spin-off, because Shaun Evans’s young Morse is a more enigmatic character then Kevin Whately’s dreary Lewis. Roger Allam too, as Morse’s immediate superior, DI Thursday. They’re a good double act with an interesting working relationship: at times awkward, but with an underlying mutual appreciation that in this one almost bubbles over into affection.”
Sam Wollaston, The Guardian

“I don’t believe Shaun Evans is right as young Morse on Endeavor. Introspective shyness is, actually, not that hard to play on television and in this franchise actors John Thaw, Kevin Whateley and Laurence Fox have done so charismatically. Evans, although he looks interestingly haunted, has a weak, muffled voice; as a result, his character feels indistinct, almost immaterial beside Roger Allam as his kindly, sympathetic but funny boss Thursday.”
Andrew Billen, The Times

“It was, inevitably, a somewhat triumphalist account of what Alan Yentob described as ‘the most competitive television market in the world’, aware of the global reach of the industry’s products and bound up in a nostalgia that wasn’t likely to be shared by all British viewers… But anyone interested in the maturing of American television – its voyage from post-war analgesic to the novelistic complexity of the best cable shows – would have found something to enjoy here.”
Tom Sutcliffe, The Independent

“There was nothing particularly original about The Ice Cream Girls: from the cheesy flashbacks that revisited the Nineties to a clichéd pitching of the lead characters at opposite ends of the social spectrum… Perhaps the only star was the Brighton landscape, which – with its Waltzer rides and lapping waves – provided a highly attractive backdrop. When it comes to entertainment, though, I’ve seen more enriching shows at the end of the pier.”
Alastair Stewart, The Telegraph

“The Village isn’t gloomy, it’s just weird. Last night’s episode was so surreal that I was reminded of Cambodian films, based on ancient myths, in which cows fly and people routinely turn into swords… Not even the Beatles, in their LSD-taking phase, could have come up with anything as freaky as this.”
Matt Baylis, Daily Express

“Florence was impressively recreated in sweeping CGI, in the manner of the Assassin’s Creed video games… Yet there is an abiding sadness that Da Vinci’s quest for empirical knowledge of life and the universe isn’t deemed heroic enough for TV drama. Instead, creator, David S Goyer invented a bunkum quest for the ‘Book of Leaves’, a fabled lost text of the Sons of Mithras fraternity… No doubt, further mumbo jumbo and cod psychology await in coming weeks.”
Alastair Stewart, The Telegraph

“Using archive footage, interviews with members of the film industry, and a Hitchcock treasure trail around London, last night’s documentary gave us a jam-packed, if superficial, rundown… Hitchcockian tropes, jokes and suspense scenes, as well as his time in Hollywood, were all touched on in this whistle-stop tour… As a Hitchcock beginner, I found it all fascinating but I fear that fans hoping for a detailed critique of the master’s early films may be disappointed.”
Lucinda Everett, The Telegraph