“It featured narrative machinery so surreally creaky that you wondered at times whether it would end up being explained away as a dream sequence.” Read on for the verdict on last night’s TV. 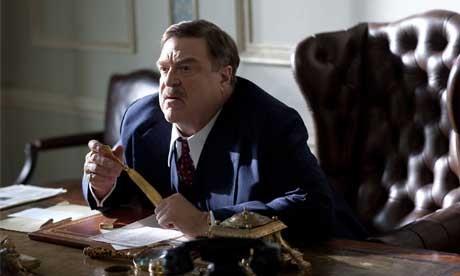 Dancing on the Edge, BBC2

“The last episode of Poliakoff’s drama about prejudice and class tourism in pre-war London reminded you of his ability to deliver a scene whose meaning is just tantalisingly out of reach. But it also featured narrative machinery so surreally creaky that you wondered at times whether it would end up being explained away as a dream sequence.”
Tom Sutcliffe, The Independent

“The plot points had been repeated so often in the dialogue that Poliakoff’s 1930s jazz drama almost felt like a piece of performance art. Of course, it was beautifully styled and acted. And there was ambiguity (at last) in a climactic scene in which Julian twitched around a café; viewers unsure whether he was going to aim his accusations and his gun at Masterson, or Donaldson, or – as it happened – himself. But you got the feeling we could have said that ‘proper goodbye’ at least half an hour earlier.”
Alex Hardy, The Times

“In the end the storyline let us down… Poliakoff it seems didn’t want to make up enough plot to make this drama hit us hard, opting for the weakly pleasing artifice of symmetry by ending the drama in the manner it had begun.”
Serena Davies, The Telegraph

“In the last of his Black Mirror series, Charlie Brooker pulled off another unexpected turn, setting us up for a crass ‘all politicians are con artists’ satire but leaving you thinking a little harder about the consequences of such blanket cynicism… Like last week’s drama, it felt a little rough around the edges here and there. But I wish we had more roughness like it.”
Tom Sutcliffe, The Independent

“As a mockery of the deeply compromised ideals of modern politics – people who simply hated politics could now vote for Waldo – the satire worked This was because Brooker didn’t over egg it, at least not until the end … The message that we may complain about our politicians but they’re all we’ve got scored a bleak bulls-eye.”
Serena Davies, The Telegraph

“I’m not at all sure what kind of programme it is meant to be. Is it a magazine show in which newsworthy foody stories can get airtime or is it yet another cooking show? You tell me, because I’m not convinced the producers have made up their minds. Which leaves the whole thing rudderless. A bit of discussion, a bit of cheffery with the ever-charming Michel Roux Jr, and half an hour passes agreeably enough without anyone being any the wiser about what its point was.”
John Crace, The Guardian

“Film-maker Lee Phillips got perception-shaking access to this, a far-removed but incredibly relevant world… I hope the best for them all, the staff and inmates. But it felt like an ever-decreasing circle of Hell, like trying to fight a forest fire using a water pistol.”
Alex Hardy, The Times

“This was a fine piece of film-making, which highlighted the utter impossibility of trying to impose the culture and practices of the sophisticated West on a country that seems stuck in the 12th century.”
Virginia Blackburn, Daily Express

“I’m sure this programme plays to all my basest instincts. It’s loud, lairy and blokey and there’s no pretence that anyone’s terribly interested in ‘fragile marine ecosystems’… And yet I can’t help loving it. I loved it when it first appeared and I love it still, even though I know I’m basically watching the same show over and over again.”
John Crace, The Guardian