“It needed the extra jokey-blokes stuff like a tortilla needs mayonnaise.” 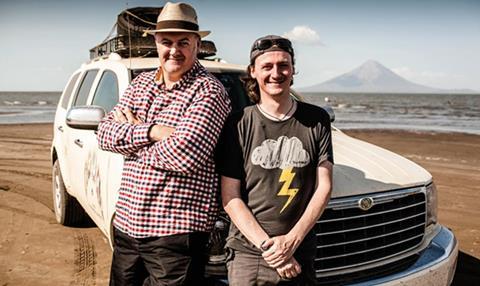 “A simple logic dictates that putting two such all-around good eggs into an interesting situation ought to deliver winning TV. It doesn’t, not least because wherever they are, funny men become rather tiring after a while. It needed the extra jokey-blokes stuff like a tortilla needs mayonnaise.”
Matt Baylis, Daily Express

“Their film didn’t quite fulfil O Briain’s promise that the pair were “beyond small talk”, but at least they were willing to call each other up on it when they did veer into platitudes.”
Alex Hardy, The Times

“Dara and Ed’s Great Big Adventure is the latest in the growing and presumably cheap genre of blokey travelogue. The two Irishmen are physically well matched and, having known each other for a long time, are well- practised in their banter.”
Gerard Gilbert, The Independent

“It’s jolly, and pleasant but standard comedians-on-the-road travelogue fayre, which was made pretty much redundant by the brilliance of Steve Coogan’s and Rob Brydon’s The Trip. I mean, seriously, you choose: a little amiable banter and how to make Mezcal, or two middle-aged blokes suffering their own existential crises and laying themselves bare like angsty teenagers? Exactly.”
Sam Wollaston, The Guardian

“The one thing that Dara And Ed’s Great Big Adventure really lacked was a script — a few pre-agreed gags would have made a lot of difference. Much of their Great Big Adventure was spent repeating each other’s lines as they searched for something funny to say.”
Christopher Stevens, Daily Mail

“This opening episode tried hard to show a rounded picture, have a triumphant ending, but it just made me feel really worried, both for teenagers and their parents. Hashtag sad face, as the young folk featured would never say.”
Alex Hardy, The Times

“It’s not very hard to see how social media might be contributing to the much reported explosion in adolescent self-hatred and other mental-health issues. On the other hand, what was heartening here was the self-awareness of most of the teens in Teens: they may not have experienced a pre-internet age, but they understand online forces more fully and viscerally than us epoch-straddling adults.”
Gerard Gilbert, The Independent

“It takes a bit of getting used to – text all over the screen, alerts and beeps. Teens, like subtitled foreign television, is not a good one to watch with your tea, unless you’re a champion multi-tasker. It’s interesting, innovative television, but sometimes confusing. But it’s about teenagers, so it’s OK that it’s unpredictable and a bit annoying.”
Sam Wollaston, The Guardian

“As a programme, it was like a bowl of soup with a steak floating in it. Nothing made sense. There’s a word, in TV circles for a story that looks towering and textured but turns out to be little more than air. It’s a meringue.”
Matt Baylis, Daily Express

“If you want to pretend that slivers of beetroot, smears of raspberry sauce and smudges of cream are both an artform and a slap-up meal, you’re either deluding yourself or lying to the rest of us. The pity was that Carl already knew how to serve grub that people wanted. It was painful to watch.”
Christopher Stevens, Daily Mail

“There’s nothing wrong with it, it’s just unsurprising. And I feel a bit sorry for the lorry drivers on the A38. They’re pulling into the layby for one of Carl’s famous UFOs (Ultimate Fried Objects, which contain four burgers); and now they’re probably getting one poncey frigging sauted scallop with finely sliced apple and grated truffle or something.”
Sam Wollaston, The Guardian