“Hawking’s answers, and his efforts to out-do O Briain in the comedy stakes, gave us a palpable sense of the man behind the world famous digital voicebox.” 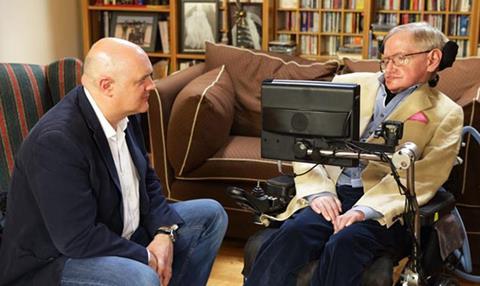 “O Briain asked good questions and Professor Hawking gave even better answers. More revealing, however, were those awkward moments when conversation didn’t quite flow. All these delays and distractions were effective at building up a picture of Hawking, a man whose superhuman determination to achieve can sometimes obscure his ordinary humanity.”
Ellen E Jones, The Independent

“As an interviewer, O Briain while lively was not especially penetrating. Still the playfulness and mischievous charm that characterised so many of Hawking’s answers, and his efforts to out-do O Briain in the comedy stakes, did succeed in giving us a palpable sense of the man behind the world famous digital voicebox.”
Gerard O’Donovan, The Telegraph

“O Briain is an excellent choice of host, asking difficult questions despite his clear reverence for his subject, and it is impossible not to feel the contagion of his sheer pleasure in finding himself in such a situation. It seems a shame that Hawking’s work is relegated to a brief chat about Hawking radiation, right near the end.”
Sam Wollaston, The Guardian

“That in 45 minutes Hawking’s life’s work received barely five minutes of airtime and that his theories were neither explained nor critiqued must be one of this year’s great missed opportunities by the BBC.”
Andrew Billen, The Times

“Dara’s uncritical approach meant he would never dare raise awkward questions about the claims that Hawking had been abused by his second wife, let alone tackle embarrassing stories that the scientist has been an attendee at strip clubs and swingers’ parties.”
Christopher Stevens, Daily Mail

“Your Inner Fish: An Evolution Story is an unexpected delight of the nature schedules. To what is, in some senses, just a pile of old bones, anatomist Neil Shubin brings a delicious wit and a storyteller’s turn of phrase, turning evolution itself into something of a saga.”
Matt Baylis, Daily Express

“Dr Neil is engrossed in his subject, but he doesn’t quite trust viewers to share his excitement. The result was like an Open University lecture on This Morning — neither fish nor fowl, reptile nor mammal.”
Christopher Stevens, Daily Mail

“Undercover generally didn’t work. There is little shame in that. The attempts to make politically acceptable a passage of dialogue saturated with the word ‘paki’ snapped my patience, however. Well over that edge.”
Andrew Billen, The Times