TV Critics: Detectorists; Class of 92: Out of Their League; Kitchen Impossible; Rent a Cop

“Not a life-changing find maybe, but a comedy trinket that deserves to be discovered.” 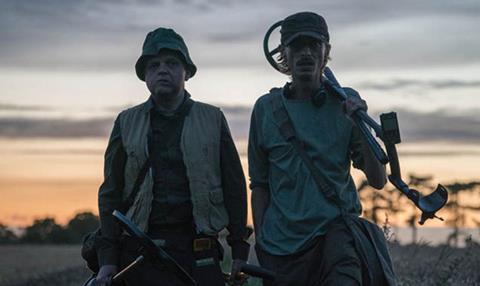 “People love this bucolic folk-com in part because it celebrates an eccentric hobby rather than mocking it. By escaping their domestic worries during their rambles, Andy and Lance mine something more valuable than any Saxon hoard: male friendship. That and another rare thing of late, a funny BBC sitcom.”
James Jackson, The Times

“Things meander along at a pace which makes Last of the Summer Wine feel like Spectre. It has a slight Vicar of Dibley feel to it too, but it is much more intriguing and edgy than any of its gentle comedy predecessors. The real action occurs in the private and emotional lives of the detectorists, well-drawn characters for whom we develop a strong empathy.”
Sean O’Grady, The Independent

“It’s so beautifully and understatedly performed, and observed, and true. Not a life-changing find maybe, but a comedy trinket that deserves to be discovered.”
Sam Wollaston, The Guardian

“Mackenzie Crook’s series, back for another rummage in the Anglo-Saxon subsoil of bromance and bathos, is that rare find: a truthful comedy about decent losers.”
Jasper Rees, The Telegraph

“Like many new sitcoms, it’s a show that’s kind on its characters, more interested in displaying them as people than putting them in nasty situations. So Andy and Lance aren’t laughable but they do make us laugh.”
Matt Baylis, Daily Express

“It’s not just about the Class of 92. It’s about Gareth, Chaddy, Phil P the manager (while he lasts), Karen the chairwoman and Babs on burgers. It’s a thorough, thoughtful – sometimes funny, sometimes moving – look at a football club at a turning point in its life.”
Sam Wollaston, The Guardian

“This was an honest, appealing portrait of broken dreams in the basement, where English football players can still get a game. This was football as was, before leg waxing and Twitter.”
Jasper Rees, The Telegraph

“Every time Gary Neville made a grand pronouncement, the camera would cut away to a bewildered tea lady, and a comedy tuba struck up on the soundtrack. You could almost suspect director Nick Mattingly was taking the mickey.”
Christopher Stevens, Daily Mail

“This is The Undateables given a Jamie’s Kitchen-style cause; not just about disabled people, but people’s reaction to them. If it takes a primetime TV format to make you question your thoughts about that or to help any of the likeable protegés hold their heads up higher, then let’s cautiously applaud it.”
James Jackson, The Times

“Nice has become the new nasty on TV. In place of Gordon Ramsay terrorising restaurant chefs we now have shows like Kitchen Impossible. I have many hopes for this series and its participants.”
Matt Baylis, Daily Express

“I strongly recommend you catch up with the world of Rent a Cop. This is the sort of ‘observational’ gold that channel controllers must dream about detecting under the surface of unpromising televisual mud.”
Sean O’Grady, The Independent