“Shocking one minute, sweet the next.” Read on for the verdict on last night’s TV. 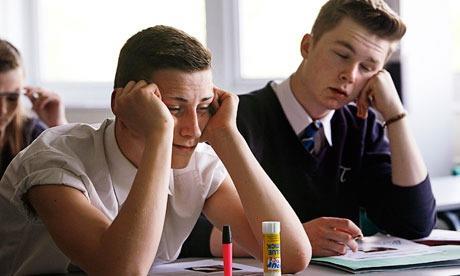 “As with all other school documentaries, our assumptions were challenged as we got to know the students. Surely, though, we have seen these characters before, although it was not ground-breaking, it was occasionally funny - and heart-warming.”
The Independent, Emily Jupp

“The basic idea remains the same: trying to keep these kids on the rails and give them some kind of start to life. Shocking one minute, sweet the next. Also gripping, hilarious, terrifying, powerful, tragic… bit like school really.”
The Guardian, Sam Wollaston

“Educating Yorkshire? They should have called it Disciplining Dewsbury. For although this fascinating follow-up to Channel 4’s fly-on-the-wall documentary Educating Essex was filmed in a secondary school in the West Yorkshire town, scarcely a scene showed a class being taught. The strength of this programme lies in its open-handed approach to its subject. Edited down from 2,000 hours of footage shot on 64 cameras, the series captures the school ecosystem in the non-judgemental way that a wildlife film might depict a pride of lions. ”
The Telegraph, Benjamin Secher

Mum and Dad Are Splitting Up, BBC2

“It would have been far more interesting to have a longitudinal study of the children, seeing if they would repeat the mistakes of the parents, but that would take time and money , so, instead, we had this. One message is clear: even though divorce is common, it doesn’t make it any less hard to deal with.”
The Independent, Emily Jupp

“If there’s an award for saddest programme of the year, this must be a very strong contender. If anything could bring home the damage it is doing, it is this.”
Daily Express, Virginia Blackburn

“From the vantage view of childhood they had a surprisingly clear view of the battle, restricted only by a wistful vision of life restoring to the status quo ante bellum. Some of the stories were extraordinary. This exquisitely painful film should be available at every branch of relate.”
The Times, Andrew Billen

“Is there any subject matter with the power to haunt quite as much as that of a missing child?  It is the stuff of nightmare and that is exactly how it was portrayed at the start of the powerful three-part drama. It’s terrifically done, if you can take the difficult subject matter, it’s very well-acted too.”
Daily Express, Virginia Blackburn

“The pre-kidnapping flashbacks are shot like a sun-dappled Andrew commercial. The present-day scenes are all darkness and damp. The Reids’ home seems to have been redecorated in gloom. I have heard the pathetic fallacy applied to the weather, but to Farrow & Ball?”
The Times, Andrew Billen

“In the opening minutes there was a moment of scene setting so clever that I wanted to stand up and applaud. This promised to be a masterful drama, and it didn’t disappoint. The characters and their secrets were revealed amid a blizzard of clues and false leads.”
Daily Mail, Christopher Stevens

“It’s hard not to feel that we’ve had our fill of missing child dramas. Certainly, as the action here pendulummed between the present day and the events of 2008, very little felt original.”
The Telegraph, Benjamin Secher

“A caricature of school. Fun, but not moving or important.”
The Guardian, Sam Wollaston

The Big Reunion: On Tour, ITV2

“Never has there been such a bunch of bitchy, flouncy, teary, drama queens. And that was just the boys.”
Daily Mail, Christopher Stevens