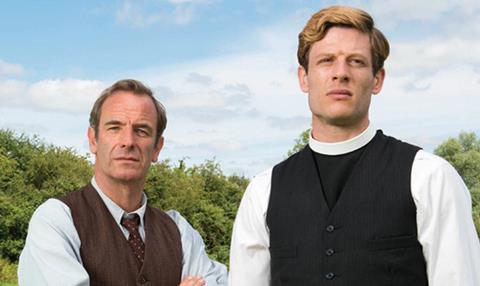 “Despite the sun-dappled meadows, the vintage cars and the tinkling of spinsters’ bicycle bells, this is a drama shot through with darkness. The atmosphere has a brutal edge: a constant undercurrent of sexism, homophobia and violence swirled in the banter between coppers … In other ways, though, this is a murder-mystery costume drama as traditional as Poirot.”

“There are no look-away moments or gruesome cold slabs. Hey, who needs those when you’ve got a good old-fashioned murder mystery, fine performances, and James Norton in his togs? Fenland gentle, it’s the new Nordic noir.”

“It was here, in these gaps between what’s right and what’s best, that the show was strongest. Norton, so good as a psychopath in Happy Valley, is equally great here as the one honest man in a thoroughly dishonest world … Can he retain his faith? The fact that there are doubts is testimony to the unusual charm of this show.”

“ITV’s reliably enjoyable crime drama rapidly re-established its ability to cloak grim realities in cuddly, familiar trappings … As the story rushed to a slightly unsatisfactory conclusion, I wondered whether the issues it raised were too complex to be adequately addressed in an ITV hour.”

“The whodunit here was, appropriately enough, something of a curate’s egg. After an intriguing set-up, momentum flagged. Its twist conclusion felt rushed and unsatisfying.”

“Despite a cracking start and a sense of satisfaction at the end, the case contained more holes than a yard of ecclesiastical lace …  There may have been the odd inaccuracy but as ever, Grantchester proved that the past is no place to long for.”

“It was all about the gags. Like the creators of Airplane!, the Moran sisters understand that if you write a huge number of one-liners it won’t matter if the odd one fails to land. “

“It’s crass, smug and laboured, a nauseating spectacle of metropolitan luvvies stroking their own egos for 30 minutes.”

“The human drama at the centre came through despite the tub-thumping and hand-wringing, but it was an honestly intended and often unsettling series.”

“However many times the narrator said ‘behind the palace walls’ and ‘meanwhile, in the palace’, the palace was at best a pea-sized part of the backdrop. Palace. What palace? “

Secrets of the Sauna, Channel 4

“Edifying, enlightening and fascinating: a proper eye-opener, although maybe don’t open them too wide near those glory holes.”