“There’s something not quite right about the Hairy Bikers dieting.” Read on for the verdict on last night’s TV. 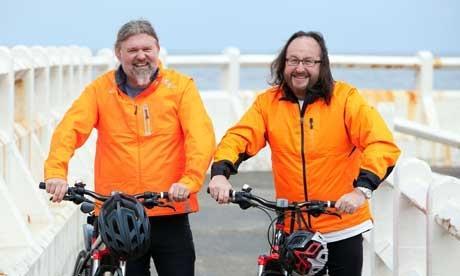 Hairy Dieters: How to Love Food and Lose Weight, BBC2

“I’m not sure it was entirely wise to start with one last blow-out… But once that odd misstep was over this turned out to be a rather more serious programme than you might have anticipated.”
Tom Sutcliffe, The Independent

“They tried their best with the homely banter and a female exercise class offered an opportunity for a few ‘squeeze your ball’ jokes, but the misery of obesity kept breaking through.”
Andrew Billen, The Times

“There’s something not quite right about the Hairy Bikers dieting. It’s like taking something away not just from their daily calorie intake, but also from who they are.”
Sam Wollaston, The Guardian

“It was the hidden strength of this film that what at first seemed like a peep into an idyllic little society swiftly revealed another story.”
Matt Baylis, Daily Express

“Just by allowing the cameras in, they risk excommunication. It’s a good thing they have though, because director Lynne Alleway’s observational film is beautiful.”Sam Wollaston, The Guardian

“While David Starkey’s sociology of modern Britain is about as nuanced as a Mr Men picture book, he knows how to make a television history lecture sing.”
Andrew Billen, The Times

“Very engrossing narrative history, braiding the careers of the Duke of Marlborough and Winston in provocative and often illuminating ways.”
Tom Sutcliffe, The Independent