“If part of art’s job is to make us look at the old world with new eyes, this programme was art.” Read on for the verdict on last night’s TV. 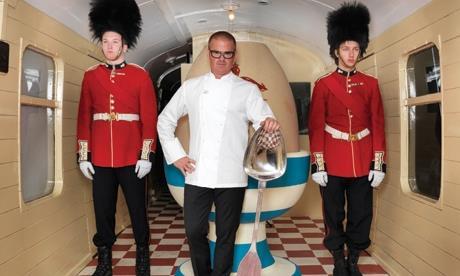 “What was objectionable about all this wasn’t Heston but the fundamental conceit that what he was doing was in some way useful. It wasn’t; it was just Heston having a bit of a laugh and trying his hand at something not even he will bother to do again. Which is fine, if you like that kind of thing, but I could have done without the endless padding that came with it. This was a 20 minute programme stretched to an hour. Heston has long traded off things being not quite what they seem. He’s succeeded once more. Only this time he turned everything into a turkey.”
John Crace, The Guardian

“The premise did not matter. You just want to see the twisted genius at work, thinking up six impossible things before, or, in this case, for breakfast… There was such exquisite method in all this madness (and in the programme) that I didn’t even want the condom he filled with egg yolk to burst. Rather wonderfully, not a single celebrity took part. If part of art’s job is to make us look at the old world with new eyes, this programme was art. Well done.”
Andrew Billen, The Times

“Mr Blumenthal is on a mission to make more of us connect with our inner child. Speaking as a resident of London, where it’s normal, if not compulsory, for 40-year-old men to wear trainers and read books about boy wizards, I think we could do with connecting a little less with our inner child and a bit more with the outer grown-up.”
Matt Baylis, Daily Mail

“Notionally it was supposed to restore a sense of childhood magic to the viewer, but as a series of unappetising looking mock-ups filled the screen (potatoes covered with tomato sauce to make giant baked beans?) I found it brought the disapproving adult out in me.”
Tom Sutcliffe, The Independent

“Ó Briain’s guided tour of the subject was conducted with considerable panache in making the complex comprehensible. It helps that Ó Briain is a naturally funny and intelligent man, but what makes him so good on television is that he comes across as a very generous presenter; someone who doesn’t need to hog the camera and isn’t afraid to let his guests take centre stage.”
John Crace, The Guardian

“They’re a lot easier to bear than the Top Gear grew and (for me anyway) the raw material is more interesting too. But the determination to splice together informing with entertaining made for some odd moments… Anyone interested in science might also feel that the ratio of jokes to hard fact could be tilted a little more in favour of the latter.”
Tom Sutcliffe, The Independent

“The new sitcom Some Girls invades Inbetweeners territory by viewing the crudeness of contemporary adolescence through female eyes. The opener spent rather too much time having Viva, played by Adelayo Adebayo (so good, they practically named her twice) tell us all about her mates, but the plot got going nicely in the second half… Feminists and the Daily Mail should find it equally dispiriting.”
Andrew Billen, The Times

Food in England: The Lost World of Dorothy Hartley, BBC4

“Presented by historian Lucy Worsley, this was a tribute to a woman who really defied pigeonholing… Other people have looked to Hartley’s book to tell them how to light a log fire or boil a kettle of water in the open… Worlsey gave it, and its uniquely gifted and eccentric author, a wonderful puff.”
Matt Baylis, Daily Mail