“Grade’s still childish delight in discovering more about the artform made me wish it was a requirement of any documentary presenter to be so devoted to his subject.” Read on for the verdict on last night’s TV. 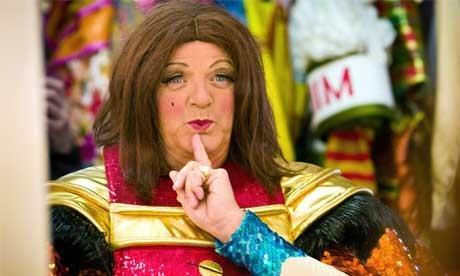 “Michael Grade’s still childish delight in discovering more about the artform made me wish it was a requirement of any documentary presenter to be so devoted to his subject. You got the sense he already knew a lot of what we learned, but his joy throughout was infectious.”
Simon Usborne, The Independent

“In Grade’s entertaining if lightweight History of the Pantomime Dame, there was plenty of defensiveness about whether Twankey and co are drag acts… Only the late Terry Scott admitted that the part appealed to his inner femininity. The nipple-tassel whirring clip of his strip-tease was, to say the least, interesting. But as winter draws on, well done Lord Grade for entering into the spirit of things. Patten, you’re on next.”
Andrew Billen, The Times

“Fascinating as Grade’s tour of the phenomenon was, it favoured interview and anecdote over any kind of argument. That was fine but I couldn’t help wanting him to delve deeper. Could the role reversals of panto tie into the pagan tradition of the Fool becoming King, the Master dishing up dinner for the servants? Does the Dame’s licensed rudeness have anything to do with the British sense of prudishness? Maybe the atmosphere was too Christmassy to deal with such searching questions. However this was a programme on BBC4 not ITV1 so perhaps Grade could have lifted the curtain a little higher to reveal more.”
Matt Baylis, Daily Express

“The moment Lord Sugar paired poor Northern Irish sledgehammer Maria with Patrick the spangled saboteur, he condemned her to an early exit… Still, the Apprentice runs on a formula, so we go through the motions and, with some very careful editing, the programme-makers do their best to convince us that either of the teams could emerge triumphant… Lord Sugar ums, ahs and picks Ashleigh. Bless Patrick. He was great TV. He may one day be a great designer. But if he’d won, well, people might start to think this whole Apprentice thing had got quite silly.”
Tom Meltzer, The Guardian

“Adjudicating the final task of the series – to create a sportswear brand – Sugar looked all at sea. Here in capitalism’s final phase, no product was required, only a logo, a slogan and a ‘viral marketing campaign’.”
Andrew Billen, The Times

“Now in its third series, it benefits from the indulgence of its creators, each episode giving a funny person the chance to make a 10-minute film inspired by their own lives. It’s a bit like asking a Desert Island Discs subject to turn their best anecdote into a comedy short.”
Simon Usborne, The Independent