“To turn something so electrifying, so tense, so psychologically rich into something so workaday is unforgivable.” Read on for the verdict on last night’s TV. 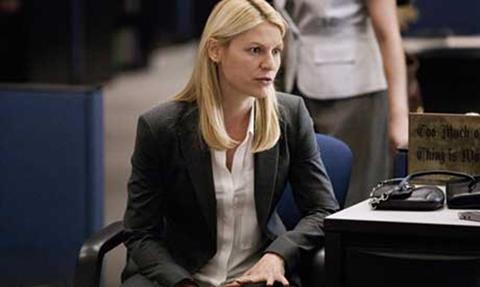 “This once wonderful series has yet to recover from the bombastic thrills of series two and return to the carefully nuanced tensions of series one. Characters that you once cared about so deeply have been reduced to caricatures… To turn something so electrifying, so tense, so psychologically rich into something so workaday is unforgivable.”
Ben Lawrence, The Telegraph

“Brody’s family life, once a source of great drama, has turned into a soap-like saga of a single mum trying to rein in a wayward daughter. Meanwhile, over in what’s left of the spooks’ offices, they’re hauling bankers over the coals about some complex and not very exciting money laundering plot. If Homeland was an agent, I’d deactivate him pronto.”
Matt Baylis, Daily Express

“With the congressman still missing, CIA assassin Peter Quinn failing to engage us, and Mandy Patinkin phoning in his Saul last night, it fell to off-her-meds Claire Danes to keep our interest. It was a duly manic performance – isn’t it so often? – but we have seen Carrie being sectioned before. Excuse us if we are no longer shocked.”
Andrew Billen, The Times

“Claire Danes’s eyes could be nominated for a Bafta for their own performance – together or separately, as that’s the way they operate… Is Brody even in this series? It doesn’t matter: it’s coming along very nicely without him.”
Sam Wollaston, The Guardian

“Beardy intelligence chief Saul Berenson, played by Mandy Patinkin, was aghast to see a Muslim female agent wearing a headscarf… We can only hope he never sees a Seventies clip from Coronation Street. Remember how Hilda Ogden used to tie hers in a lilac turban over her curlers?”
Christopher Stevens, Daily Mail

“Joanne Froggatt is the finest actor in the show and in this episode she displayed a fearful anger and, more subtly, an innate sadness as Anna realised her life would never be the same again. Her fears for her marriage to Bates (Brendan Coyle), that she was now not good enough for him and could never let him touch her, felt pitifully real and free of modern psychological opinion.”
Ben Lawrence, The Telegraph

“Although Anna’s reactions were predictable – guilt, feelings of uncleanliness, and an abhorrence to being touched even by her husband – they were also believable. If her rape has woken us up, it seems to have galvanised Julian Fellowes too.”
Andrew Billen, The Times

“Downton takes the viewer by the hand, leads them to big signs that explain, in capitals, again and again, what’s going on. Just in case you miss it. No thinking required.”
Sam Wollaston, The Guardian

“It was another annoyingly simple plot, only jazzed up with whizzy technology and yet more doe-eyed looks from ass-kicking Agent Ward (Brett Dalton) and may-or-may-not-be-a-mole Sky (Chloe Bennet)… We really have to start seeing better-developed characters, a lot less cliché and storylines that remain one step ahead of the viewer.”
Catherine Gee, The Telegraph

Inside the National Trust, ITV

“Inside the National Trust with Michael Buerk is exactly the kind of Sunday afternoon scheduling that, as a child, would have filled my heart with dread…  But with every year that passes, one becomes less interested in Teenage Mutant Ninja Turtles and more interested in what goes on behind closed doors at the National Trust. That’s how you know you’re getting on.”
Ellen E Jones, The Independent

“The legs fell off the red sofa as Norton’s guests treated his show like an awkward office party… Harrison Ford decided to leave before the end. With ten minutes to go, he simply announced that he needed to be somewhere else and was hurriedly shown off the set. It was a shambles.”
Christopher Stevens, Daily Mail

“Ross might set your teeth on edge, but at least his guests stayed for the duration on Saturday. Maybe it’s his nauseous hyperbole. They say flattery will get you nowhere, but that doesn’t seem true for Wossy. He’s as oily as a mechanic’s rag.”
Christopher Stevens, Daily Mail

“As Rageh Omaar’s splendid series reminded us, the Turks had some wonderful names for their rulers. Most of us have heard of Suleiman The Magnificent, but the likes of Selim The Grim and Yildirim The Thunderbolt rarely get a look in.”
Matt Baylis, Daily Express

“It looked like the guests were having a party in Ali Baba’s knicker drawer… Still, everyone lived happily ever after and the groom even had a smile on his face by the closing credits.”
Ellen E Jones, The Independent

“He’s quite something, this Jason, or Theseus, or Harry Styles, whoever the hell he is.”
Sam Wollaston, The Guardian