TV Critics: In The Club; Kids Behind Bars; Masters of Sex

“Kay Mellor crammed so much drama into last night’s opener it’s hard to imagine where she’s left herself to go, short of an Ebola outbreak in Leeds.” 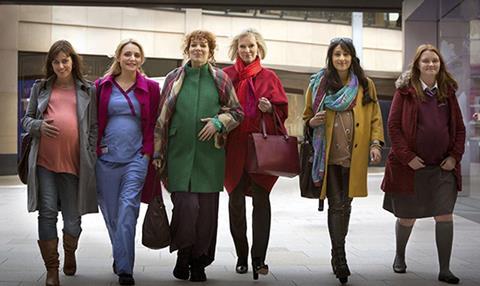 In The Club, BBC1

“It’s intricately and deftly plotted, and I accept that a lot of information needs to be doled out in the initial hour. My chief complaint about In The Club is that it’s so unremittingly gloomy. Even the lighter moments had a leaden cast.”
Tim Dowling, The Guardian

“’Ordinary’ people they may be, but Mellor had managed to pack a lot of extraordinary drama into this hour. A 15-year-old in labour burst into their pre-natal class, her school uniform drenched in amniotic fluid, there was a car crash, infidelity and even a bank robbery.”
Ellen E Jones, The Independent

“Kay Mellor crammed so much drama into last night’s opener it’s hard to imagine where she’s left herself to go, short of an Ebola outbreak in Leeds.”
Vicki Power, The Telegraph

“In The Club, on the other hand, is verging on soap opera, with massive storylines that grab you by the heartstrings and drag you racing from scene to scene.”
Christopher Stevens, Daily Mail

“In the Club begins rather brilliantly with a huge list of dietary and social prohibitions that pregnant women are expected to follow but by the end of episode one it felt as outrageously swollen as its leads’ prosthetic tummies.”
Andrew Billen, The Times

“In the Club was well written, well acted, beautifully produced and directed and I fully intend to go back next week. There’s a reason Mellor is a dominant force on British telly: she’s very good at what she does. But oof, no cliché was left unturned here.”
Virginia Blackburn, Daily Express

“Mostly, the documentary failed to get past the defences of these inarticulate inmates. These were not ‘kids’, they were thuggish young men: one was a gang member who shot and killed a rival; another had beaten a 64-year-old neighbour to a bloody pulp.”
Christopher Stevens, Daily Mail

“This was a sobering look at an intractable problem; it left one feeling that Block D was a regrettable but wholly necessary part of the penal landscape, a place where young offenders are cared for as children by a state that didn’t have the sense to try them as children.”
Tim Dowling, The Guardian

“Masters of Sex is the show you want to love and yet with every passing episode, there’s one less reason to try.”
Ellen E Jones, The Independent