“The individual strands were engaging, the period detail nicely observed and the performances very strong.” Read on for the verdict on last night’s TV. 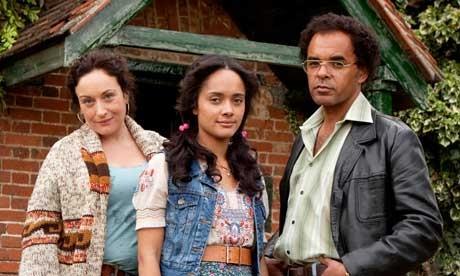 “I don’t normally like haunted house stories – all bad vibes, creaking doors and crows on the landing – but Lightfields shifted nimbly between portent and incident, and it was properly scary. The individual strands were engaging, the period detail nicely observed and the performances – particularly from Lucy Cohu as Vivien – very strong.”
Tim Dowling, The Guardian

“Simon Tyrrell’s script feels unusually solid in the gaps between the bits that you’re not really expected to believe at all, which helps to make the spookery a bit more unsettling. Don’t get me wrong. It’s not Chekhov exactly, but you’re not simply sitting there waiting for the next floorboard to creak ominously. There are things flickering in between the characters that are entirely of this world and that you sense may actually turn out to be more interesting than the bumps in the night.”
Tom Sutcliffe, The Independent

“Through the genre of ghostliness, is the writer trying to explore unhappy marriages (separation and divorce befall t 1975 and 2012 generation), pubescent female sexuality (1944 and 1975) or the toxicity of family secrets? I don’t think he is. I think he just wants to scare and entertain. There’s nothing wrong with that, of course, were he to succeed.”
Andrew Billen, The Times

“It’s almost as if I’ve been here before. The summer sunlight, the sumptuous photography, the stately pace, the three generations, the old house where terrible things happened… Good heavens, the lights just went out! Gave me quite a shock. I rather enjoyed it, though.”
Paul Gent, The Telegraph

“It’s the fist of five episodes but what stood out more than almost anything else was how Kris Marshall has grown up. Indelibly branded into the national consciousness as the happy-go-lucky son in My Family and the happy-go-lucky Adam in the BT adverts, this is clearly his bid to turn into a ‘serious actor’. Good effort but was it quite so necessary to turn the air blue?”
Virginia Blackburn, Daily Express

Child Of Our Time, BBC1

“If you have children of a similar age and you cried through the Toy Story films, I urge you to approach this with caution. The parents all looked shellshocked and spent, and to have their memories illustrated with actual footage was pretty heartrending. When Child Of Our Time began, I assumed it would be fascinating to watch a child grow up before your eyes over the course of a few minutes; I never imagined it would be painful.”
Tim Dowling, The Guardian

“Why was yesterday’s latest instalment of Child of Our Time, ooh, 20 times duller than Up? It was only partly due to the blandly generalising voice-over of Professor Robert Winston (I swear he has the world’s only audible moustache). It was also to do with the children themselves. They were filmed coming up to 13, and the programme made much of this being an age of transition from childhood to adulthood. But they were all so damned pleasant and reasonable. I could have done with more like Rhianna, who was obsessed with money and liked the idea of turning old people into soup.”
Paul Gent, The Telegraph

“Imitation is the sincerest form of flattery so we mustn’t carp at Child in Our Time… It certainly provided a charming, if at times depressing, snapshot of young lives. Bullying, body image, divorce and feckless parenting all played a part.”
Virginia Blackburn, Daily Express

“Apart from the usual mind-numbing bulk-filler of repeated information after every advertising break, and the traditional sprinkling of pointless intensifiers (“It would just mean the world to me to win”), the programme isn’t bad, honouring the kind of dishes that rarely get much attention.”
Tom Sutcliffe, The Independent

“The compilation showed that in five series Gregg Wallace has yet to say anything interesting and Monica Galettis few things nice. But Michel Roux Jr made me laugh the most. Eyeing a ‘paintbrush’ of chocolate sauce on a white plate, he remarked that it didn’t look too ‘hygienic’.”
Andrew Billen, The Times