“Its characters seem so deliberately ‘there to say something’ that they feel less like people and more like plot devices.” Read on for the verdict on last night’s TV. 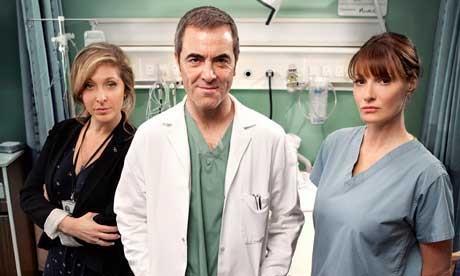 “I like the ambition of ITV1’s returning drama, its sharp filming, its moral wrestles. But the production team seem to target the heartstrings just as precisely. X-Factor-style musical swells surround each turn of storytelling. Its characters seem so deliberately ‘there to say something’ that they feel less like people and more like plot devices.”
Alex Hardy, The Times

“James Nesbitt is among television’s most infuriatingly perky performers. With those Ronald McDonald eyebrows arching high on his forehead, and the cocky rapidity of his delivery, he tends to exude self-regard in any part that isn’t painstakingly written to forestall it. And Monroe isn’t one of those parts.”
Tom Sutcliffe, The Independent

“It’s not bad at all – it’s smart, Nesbitt is as watchable as ever, there is obviously some very interesting camera work. But it’s simply not as good as House.”
Sam Wollaston, The Guardian

“Most of the episode was devoted to the usual slightly unbelievable high jinks: Monroe pushing back the frontiers of neuroscience while delivering barbed witticisms in the canteen and behaving outrageously whenever he had a flagon of house red inside him… We have all seen a great deal of this twaddle before.”
Matt Baylis, Daily Express

“We’ve had the analogy ‘cracking a nut with a sledgehammer’. Road Trip felt like going for a sledgehammer with a nut. This, surely, is subject matter still too achingly significant to be wrapped in a slightly novelty bow.”
Alex Hardy, The Times

“There’s a sense of scaffolding that exists to do nothing but hold itself upright for an hour, and to which has been bolted dialogue as familiar and interchangeable as Meccano components.”
Tom Sutcliffe, The Independent

Health Before the NHS, BBC4

“Bloody hell, what a nightmare. I’m glad I wasn’t born at the beginning of the 20th century.”
Sam Wollaston, The Guardian